Hong Kong pushed to the brink of total collapse PHOTO/VIDEO 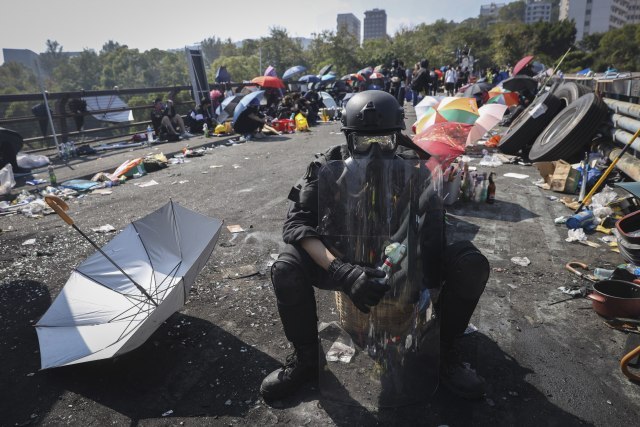 As a result, parts of public transport, schools and many businesses will be closed following the escalation of expected violence.

As a result, parts of public transport, schools and many businesses will be closed following the escalation of expected violence.

The flare-ups occurred a day after police shot an unarmed protester at close range and a man was doused with petrol and set on fire in some of the worst violence since the protests began nearly five months ago in the China-ruled city.

#HongKong protesters produce petrol bombs. The protest is organized and there must be a funding source. #HongKongProstests pic.twitter.com/Mve7bGKKVr

More than a thousand protesters, many wearing masks, protested in the financial district for the second day in a row, and roads were blocked around some of the city's highest skyscrapers and the most expensive real estate.

Hundreds of masked protesters, many of them students, hurled back petrol bombs, rocks and bricks, some launched with catapults. After the clashes, dozens of the injured lay sprawled on the ground.

After they had dispersed, police fired tear gas at the remaining protesters and made more than a dozen arrests, Associated Press reports.

Many subway and train stations were closed after protesters blocked passenger ships and attacked trains.

Classes were suspended at universities, and parents were advised not to let their children outside.

TV footage showed activists dropping heavy objects from overpasses on to traffic below. “Our society has been pushed to the brink of a total breakdown,” Senior Superintendent Kong Wing-cheung told reporters, referring to a two-day violence.

Conflicts have erupted in several other places, both at City and Chinese University, where protesters threw Molotov cocktails and bricks at the police.

#HongKong rioters are gearing up pic.twitter.com/BOnOz8fb4k

Riot police also fired teargas at protesters at two universities, as protesters lit barricades and set a car on fire.

The demonstrators have been protesting since June against what they believe to be meddling by Beijing in the freedoms guaranteed under the “one country, two systems” formula put in place when the territory returned to China from British rule in 1997.

Tough police tactics in response to the unrest have additionally fueled anger.

China denies interfering and has blamed Western countries including Britain and the United States for stirring up trouble.

The United States on Monday condemned “unjustified use of deadly force” in Hong Kong and urged police and civilians to ease the tensions.