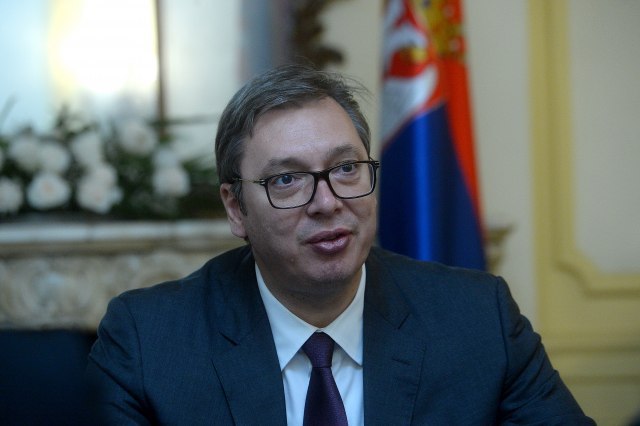 Vucic emphasized that it is important for Albanians to understand this in order to think about what kind of future they want for themselves.

In this way, the President of Serbia responded to Hashim Thaci's comment that he entered the UN "through the door" and Vucic "from the ceiling", through the Kosovo people.

"Maybe I came in from the ceiling, I don't know which way he entered, but I'm delivering a speech tomorrow in the grand hall of the UN General Assembly, and what about you, Hashim, when's your speech scheduled? Well, never. Entering from the door, or from the ceiling, it's the same: Serbia is UN member and Kosovo is not. And it would be good for you to know this, to think about what kind of future you want, and whether you want to reach compromise or continue to be stubborn", Vucic said, adding that he understood Thaci's words that he, Vucic, was elected by the Serbs from Kosovo.

He points out, however, that the Albanian's strongest foothold is in New York:

"The center of Albanian strength is not in Pristina, nor in Tirana, but in New York," Vucic said, recalling that the third Prizren League was formed in New York in 1946, and that it "cost us dearly", because huge sums of money were invested from New York.

Asked how he commented Kosovo Albanians "chasing officials at restaurants to take pictures", Vucic said that they were doing their job and that we were doing ours.

It is not easy for them, he says, and our job is to make things harder for them in the future.

Vucic said that Albanian Foreign Affairs Minister Gent Cakaj, a Kosovo-born Albanian politician, said that they were working on Kosovo's recognition in New York, but added that they certainly cannot ban Serbia from doing its job of trying to persuade international community to withdraw that recognition.

Asked if he was reproached for Serbian efforts in revoking Kosovo's independence and whether this was "hinted" to him at meetings in New York so far, Vucic said that this was not just "a hint" but that he was told so countless times at every single meeting, and that it was common reaction.