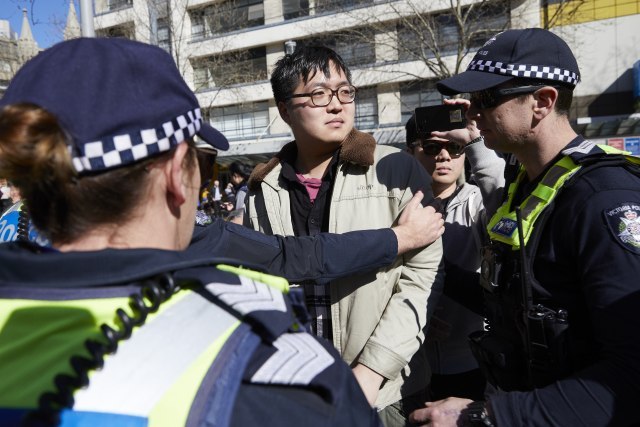 That happened during the meeting, at which hundreds of people from Chinese community in this Australian city gathered.

The police said that they have questioned two male persons regarding “illegal attack”, after pushing and arguing at the meeting, which was organized as a sign of support to meeting participants in Hong Kong.

Nobody got hurt in the accident, says Reuters. Australian media said that there were 600 people at the meeting.

“We respect the rights of community to express their opinion in calm and legal way, but we won't tolerate those who break the law or those who behave in an antisocial or violent manner”, said a police spokesman in Australian state Victoria, via e-mail.

There was one more meeting in Melbourne on Sunday, as a sign of support to the protesters in Hong Kong, which attracted about 100 people.

British “Guardian” said that small group of people started to yell at the gathered ones, but the police brought them out of the meeting.

Similar protests, but smaller, were held on Friday and Saturday in some other Australian cities.

The protests against the authorities close to the official Beijing in Hong Kong were continued today, and the teachers joined them today as a sign of support.