383 members of European Parliament supported her, while 327 opposed her election 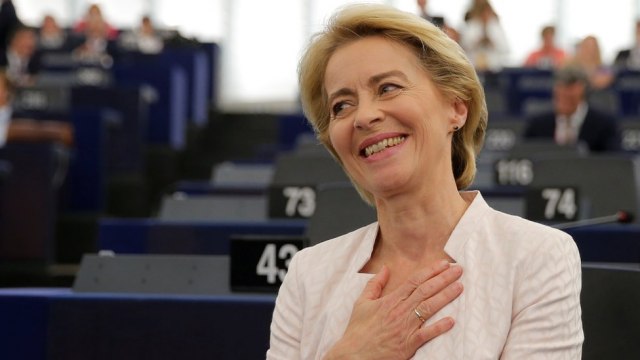 On 1 November, Von der Leyen will be the first woman to take on the Commission presidency.

383 MEPs supported her, while 327 opposed her election. In order to be elected to the post, she needed 374 votes out of the present 747 Members of European Parliament.

German Defense Minister will replace Jean Claude Juncker on this post from November 1, 2019.

"It is a big responsibility and my work starts now. My message to all of you is let us work together constructively, because the endeavor is a united and strong Europe,", she said in an inauguration speech.

Who is Ursula Von der Leyen?

Born in Brussels, Von der Leyen and her family moved to Germany when she was 13. She studied economics at London's LSE and medicine in Hanover before going into politics.

She has been a member of Merkel's conservative Christian Democrats (CDU) since 2005.

Now 60, Von der Leyen is the mother of seven children.

Her appointment as German Defense Minister in 2013 was unexpected and followed three months of coalition talks between the CDU and the centre-left Social Democrats (SPD).

As defense minister in the EU's most industrialized and populous country, she has argued for Germany to boost its military involvement in the North Atlantic Treaty Organization (NATO).

However, her tenure in the defense post has not been without incident.

In recent years, a litany of stories have exposed inadequacies in Germany's armed forces, from inoperable submarines and aircraft to shortages of personnel.