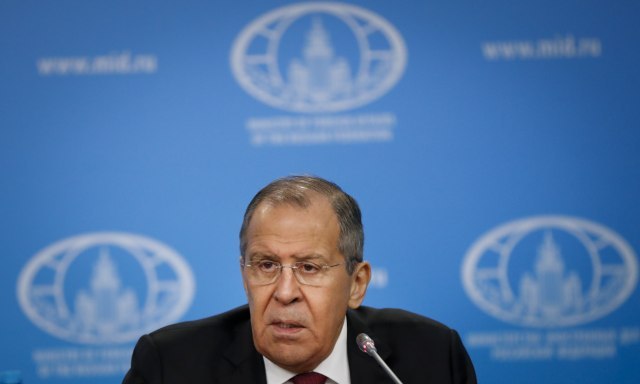 He also noted that the calls for open intervention in Venezuela were surging in the United States when addressing the recent news about National Security Adviser John Bolton holding a note with the words "5,000 troops to Colombia", Sputnik is reporting.

Lavrov also spoke about the "cynical sanctions" imposed by the US on the Venezuelan petroleum company PDVSA, stressing that the move shall lead to the deterioration of the international financial system, based on the US dollar, and also provoke a conflict in Venezuela.

"The US, unfortunately, has experience in such illegitimate handling of other’s money. Such freezing was applied at one time to Iraq, Libya, Iran, Cuba, Nicaragua, and Panama. In most cases, this freezing essentially resulted in the confiscation of assets from another government. The British authorities are doing the same thing now by arresting, and in fact confiscating, the gold reserves of Venezuela, which are stored in London", he stated.

BREAKING: US violates all norms of international law in situation with #Venezuela - Lavrovhttps://t.co/yWuZJQsiP7 pic.twitter.com/4JFTKAUSgk

The Venezuelan crisis started after Juan Guaido, the speaker of the parliament - the only body controlled by the opposition, declared himself as the country's president, during one of numerous protests against President Nicola Maduro.

Washington immediately stood behind Guaido, as did many Latin American countries, prompting Moscow to consider the US to be behind the rebellion.

Maduro himself blasted it as ove as a coup staged by Washington and said he was severing diplomatic ties with the US.