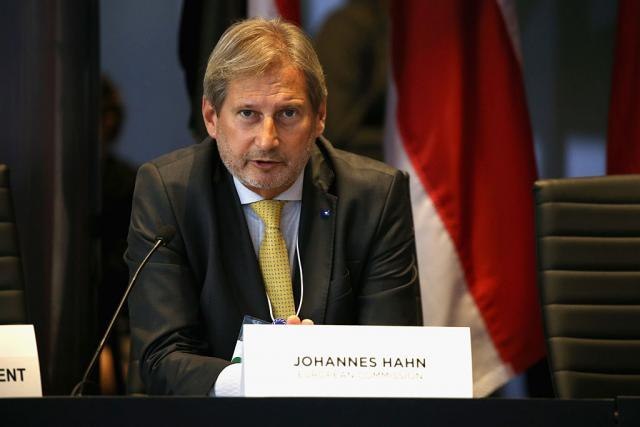 He added that there have been events in the past few weeks that would in the past would have lead to "both sides reaching for their weapons."

"Today, the presidents of these countries reach for the phone and call each other," the EU official has been quoted as saying.

According to him, these are some positive moves when observed over a longer period of time.

"Of course, in the meantime, on the one side and on the other, there have been steps backwards, but we should not allow this to discourage us. The introduction of Kosovo import levies is one such step backward, and now we need to look for a solution," Hahn says.

He believes that significant steps have been taken in the Balkans over the past several years.

"We are close to the decision of the Greek parliament to accept the agreement on changing the name of Macedonia into North Macedonia, starting with the assumption that this will be solved and this is a gigantic success and I have invested a lot of effort and time in the development of that country since 2015, Albania also makes successful steps, "he said.

Asked about what the EU today has to offer to the states that want to become members, Hahn says that his leitmotiv was neighborhood politics.

"And that is also true for the Balkan countries that are candidates for membership - that we will either export the stability of the EU outside the EU or we will import instability in the Union. And we all understand that sustainable peace, economic development, social development, reconciliation, none of that is possible if each of the former countries does not have a European perspective. From that of course the existing member states, citizens and of the European Union naturally benefit."

Hahn what the EU's doors are open and that each state has a key to that door and can open it.

"Some countries are better prepared, others are less so. As the Commission last February, we announced our strategy for the Balkans, in which we clearly outlined that every new state can become a member only when it has resolved all bilateral disputes and conflicts."

Hahn did not want to specify which country is closest at this moment "to use this key."

"Someone will say that they are Montenegro and Serbia, because we are already negotiating with them, Montenegro has opened the most negotiating chapters, with Serbia we are constantly opening new ones, but that does not say that these countries will first pass through the imaginary target line," he said.