After visiting Belgrade, (Sebastian) Kurz headed for Pristina and, prior to meetings with Kosovo officials, said that Austria would support Kosovo in Interpol. 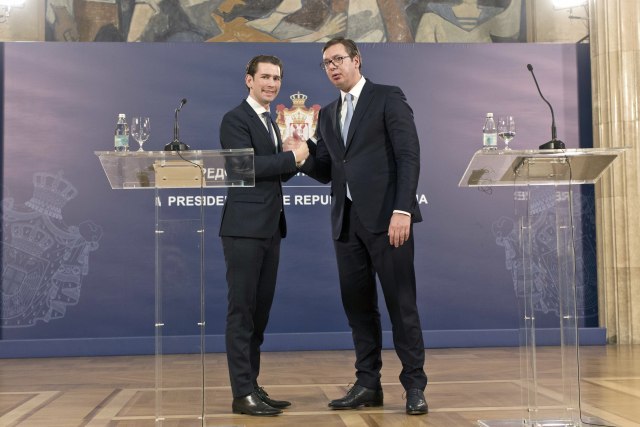 The Austrian chancellor spoke in Belgrade on Monday with Serbia's president and prime minister, and today he told the Austrian APA agency that his country supports Kosovo's efforts to be admitted to Interpol (which Serbia strongly opposes).

Kurz claims that his coalition partner, the Freedom Party, has changed its stance on the issue.

When Serbian Foreign Minister Ivica Dacic visited Vienna recently, (Freedom Party leader and Austrian Vice Chancellor Heinz-Christian) Strache told him that Austria will not support Kosovo's admission to Interpol, nor to any international organization, until a solution is reached between Belgrade and Pristina.

Two weeks ago, Strache said that the position was agreed with the president of Austria, who, however, at that time said that the Austrian stance was not yet fully decided on.

APA added on Tuesday that the government in Vienna said Kurz has now agreed with Strache and the country's interior minister that "Austria will accept Kosovo membership at that meeting" - possibly a reference to the Interpol General Assembly, to be held later in November, where the voting on the membership bid should take place.

And while Strache was in the past critical towards the idea of allowing Pristina to join Interpol, "experts made arguments about international police cooperation, which were decisive, it has been stressed by the Austrian government," media reports said today.