French President Emmanuel Macron: Is the honeymoon over? 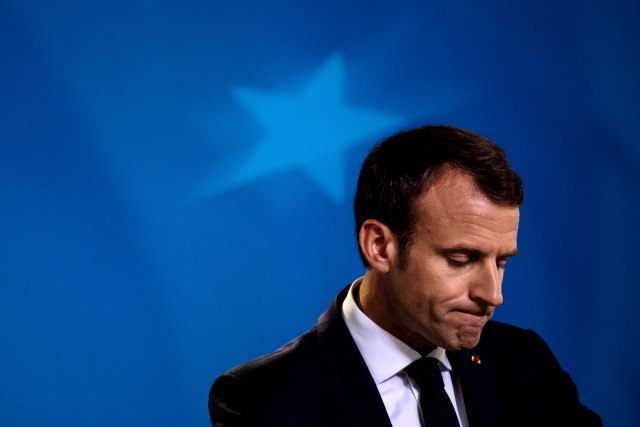 Unpopular reforms, a resigned environment minister and a bodyguard embroiled in scandal. Macron is under pressure, and it's not doing his European project any good, says the German broadcaster,.

"La rentree." Two little words with a meaning that sweeps across France once every year. The return to everyday life following the vacation month of August. The sweet, slow drum of summertime is irrevocably over and the French return from the coast to repopulate the sleepy country. Many shops reopen after a long break, the metros fill up with commuters and every student from Lille to Aix-en-Provence starts the new academic year.

The merciful period of disinterest that the French grant their government in the summer months also comes to an end. The nation follows the politics of the Elysee with fresh sharpness.

And French President Emmanuel Macron is feeling the nation's eyes upon him. His summertime was by no means sweet and idle — the president struggled his way through a summer marred by stormy domestic politics. It kicked off with a scandal involving one of his security officers, Alexandre Benalla. The fact that Benalla had become violent, but as an employee of the Elysee was able to avoid the otherwise harsh consequences of his actions, outraged French politicians and public alike.
Emmanuel Macron and Alexandre Benalla (picture-alliance/AP/C. Ena)

The less-than-perfect crisis management of the so-called "Affaire Benalla" was also chalked up to Macron: First silence and an attempt to wait it out, then only a slap on the wrist.

According to political expert Jerome Sainte-Marie from Paris pollsters PollingVox, this once again exposes Macron's authoritarian style, which also causes him to sink in the polls. The honeymoon is over, "many voters are now watching their president with growing suspicion. That's new," says Sainte-Marie.

According to a recent survey by pollsters BVA, 59 percent of the French are dissatisfied with their president. Certainly, cause for concern for Macron: According to the survey, the criticism does not only come from the political opposition. Three-quarters of his constituents are also disappointed. For many who voted for the 40-year-old with left-wing hopes, Sainte-Marie said that Macron was too neo-liberal, too right-wing.

A summer offensive of European charm

That Nicolas Hulot, Macron's star minister for the environment and sustainability, has resigned, also weakens the president, who is currently traveling across Europe.Hulot resigned on the radio, saying 'I don't want to lie any longer'."

Macron has already visited 16 EU countries, most recently Denmark and Finland. The aims of this comprehensive European tour are as important to him as they are difficult. Macron wants to win the continent over in time for the European elections in May 2019. From the left to the right, across the political spectrum. His political ambition: To draw a line in the sand between Europe's nationalists and "progressives."

Political analyst Bruno Cautres of the Cevipof think tank told DW that Macron primarily wants to divide and conquer the right-wing movements in Europe. Ultimately, with his party Republique en Marche (REM) he wants "to appear as the only viable alternative," and to repeat his electoral success at European level.

But what the French president experienced on tour was far from the glory march through Europe that he had wanted. On the contrary, experts such as Olivier de France from the IRIS think tank are observing a new, strong resistance solidifying at the European level. Together with the Czech Republic and Austria, Hungarian Prime Minister Viktor Orban has for some time maintained a sharp euroskeptic tone.

The fact that Italy, a founding member of the EU, is now also seeking to join forces with Orban strengthens the Hungarian prime minister. In the traditionally liberal country of Sweden, a significant swing to the right is expected in the upcoming elections in early September.

"Emmanuel Macron is no longer encountering just a few rogue states here and there, but a new attitude across Europe," Cautres explained.

Macron also lacks many like-minded counterparts. German Chancellor Angela Merkel, who Macron is meeting in Paris this Thursday, is considered a reliable partner. Together they want to promote policies of reform, such as common defense strategy for the EU.

But in the end, Cautres is convinced that the political success of the party alliances in Europe will depend on the question of migration. That's why, he says, the EU should not be surprised if Macron's party REM does not enjoy great successes in the European elections. Cautres thinks that, unlike in the French presidential elections, the reinvigorated and rebranded far-right National Front "could achieve a very good result."