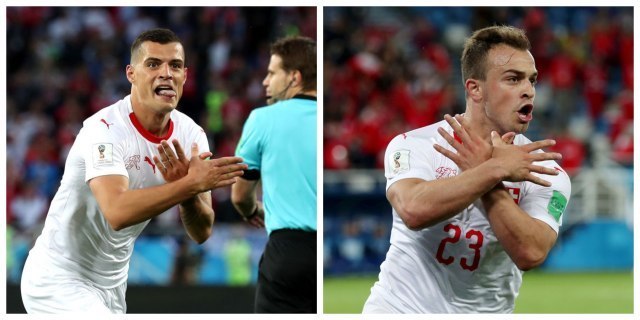 Lichtsteiner joined teammates Granit Xhaka and Xherdan Shaqiri, of ethnic Albanian origin, who celebrated during Switzerland's game against Serbia on Friday by making a hand gesture meant to represent the double-headed eagle found on Albania's flag.

This is seen in Serbia as promoting the idea of a Greater Albania - a project that would see Albania's borders expanded to include parts of Serbia, Macedonia, Montenegro, and Greece.

If FIFA finds the three guilty of provoking the fans, they will each be banned for two games.

FIFA has also launched proceedings against Kokeza and Krstajic, for suggesting that German referee Felix Brych was biased during the game, which Serbia lost 1-2.

The action is already conducted also against the Serbian football association (FSS) "for the offensive behavior of the fans."

Serbia now has 3 points from two games, and will have to beat Brazil in Moscow on June 27 to progress to the knock-out phase of the competition. Brazil and Switzerland both have 4 points, with the latter playing against Costa Rica, who have collected no points thus far.