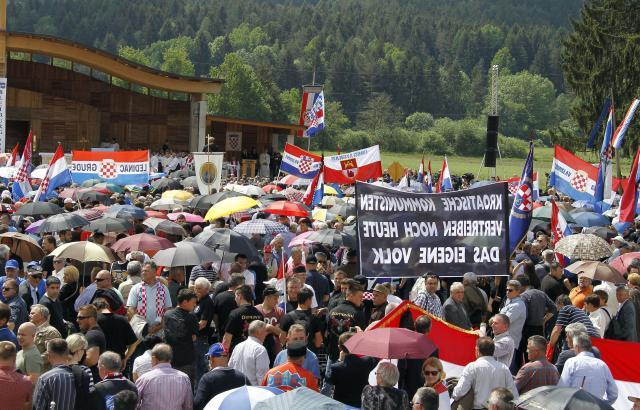 He particularly criticized the events taking place in Bleiburg each year, which the newspaper described as "annual meeting of right-wing extremists held in mid-May in Carinthia."

"See what's happening in Bleiburg. There was an extremely murderous regime," Zuroff said, referring to the Ustasha-led Independent State of Croatia (NDH), and continued: "Yet every year in Bleiburg, those people who weep for that regime gather - that's absolutely crazy."

He described NDH leader Ante Pavelic as "one of the worst mass murderers in European history" and asked - "how can he be honored?"

"This is as much a matter of the Church as I am chief rabbi of Zululand. You deliberately look away. It is absolutely crazy. And it makes me angry."

When asked "whether the Austrian population was too indifferent to such tendencies," the Nazi hunter replied, "That's obvious, yes. Otherwise it would not be possible."

As for the Bleiburg gathering, he said Austria's parliament should pass a law that also bans Ustasha symbols and prohibits any glorification of fascism.

"Austria is the worst case when it comes to prosecuting the Nazis. Nazi criminals are simply not being prosecuted here," Zuroff criticized the country earlier in the interview.

He said the problem was both in Austria's laws and their application, and claimed that Austria has "tried everything to prevent the prosecution of the Nazis."

"In the case of Erna Wallisch (a guard in the Majdanek extermination camp), then Minister of Justice Karin Gastinger told me that she could not prosecute Wallisch because what she had done represents 'only passive complicity' to genocide. If you are an accomplice to genocide, then you cannot be passive at all. Did she kill seven people while watching TV or what? It is absurd. Absolutely idiotic," Zuroff said.

He also stressed that there are Nazi criminals living in Austria to this day, but could not say how many.

Zuroff also touched on the rise of Antisemitism in Europe, to say, "We have a unique situation in Jewish history where countries in Eastern Europe love Israel and hate the Jews."

"We never had that. Traditionally, they hated the Jews, so they hated Israel too. I spend a lot of time fighting this double standard," Zuroff said.