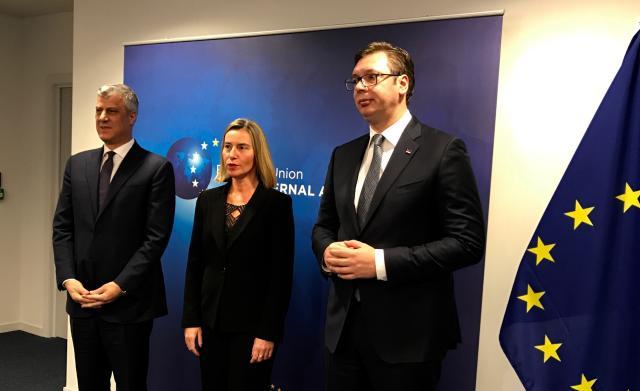 According to an EU press release, they "discussed further, within the framework of the new phase of the EU-facilitated Dialogue between Belgrade and Pristina, the preparations of a comprehensive agreement on normalization of relations."

They also "reviewed progress made in the implementation of the past agreements, in light of recent working sessions held in Brussels."

Mogherini "underlined the importance the EU attaches to the full implementation of all existing agreements and stressed in particular the urgent need to start with the establishment of the Association/Community of Serb majority municipalities, the Energy Agreement and proceed with the completion of the Mitrovica Bridge."

The high representative "welcomed the continued commitment by both Presidents to the normalization of relations between Kosovo and Serbia and recalled that progress by both on their EU integration agendas is firmly linked to progress in the dialogue," the EU said in its statement.

Speaking after the meeting, Vucic said that the Community of Serb Municipalities (ZSO), Pristina's obligation under the 2011 Brussels agreement, was not even mentioned.

The president noted that 1,799 days had gone by since the agreement was signed, while its essence has not been implemented.

"We analyzed everything else, the first six points have not been touched. That can't be the fault of only the Albanians," Vucic stressed.