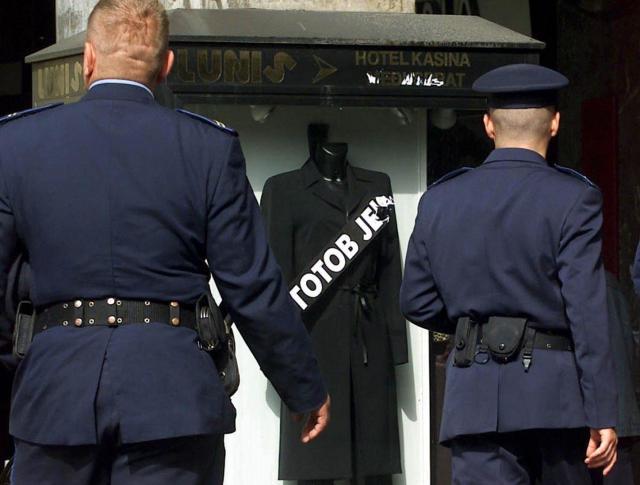 One of the stickers reading 'He's finished' in Serbian (EPA, file)

The United States "do it too," writes Scott Shane, and mentions Serbia and the overthrowing of President Slobodan Milosevic as one example.

"Millions of pamphlets, posters and stickers printed to defeat an incumbent in Serbia," along with "bags of cash delivered to a Rome hotel for favored Italian candidates" and "scandalous stories leaked to foreign newspapers to swing an election in Nicaragua" - this is "just a small sample of the US' history of intervention in foreign elections."

The article states that for the 2000 election in Serbia, the United States funded a successful effort to defeat Slobodan Milosevic, "the nationalist leader" - providing "political consultants and millions of stickers with the opposition’s clenched-fist symbol and 'He’s finished' in Serbian, printed on 80 tons of adhesive paper and delivered by a Washington contractor."

According to this, some of the other countries where the US "intervened" in the electoral process include Italy, Iraq, Afghanistan, Nicaragua, and Russia.

"Vince Houghton, who served in the military in the Balkans at the time and worked closely with the intelligence agencies, said he saw American efforts everywhere. 'We made it very clear that we had no intention of letting Milosevic stay in power,' said Mr. Houghton - now the historian at the International Spy Museum," Shane writes.

The same article notes that last Tuesday, "American intelligence chiefs warned the Senate Intelligence Committee that Russia appears to be preparing to repeat in the 2018 midterm elections the same full-on chicanery it unleashed in 2016: hacking, leaking, social media manipulation and possibly more."

And while most Americans are "understandably shocked by what they view as an unprecedented attack on our political system" - "intelligence veterans, and scholars who have studied covert operations, have a different, and quite revealing, view."

“If you ask an intelligence officer, did the Russians break the rules or do something bizarre, the answer is no, not at all,” said retired CIA officer Steven L. Hall, stating that his country carried out "such election influence operations historically" and adding, "I hope we keep doing it.”

Also during the weekend, former CIA Director James Woolsey said that the US "probably" meddles in elections around the world - "but only for a very good cause in the interests of democracy."

“Oh, probably, but it was for the good of the system in order to avoid communists taking over,” Woolsey said when asked whether the US interferes in other countries’ elections.