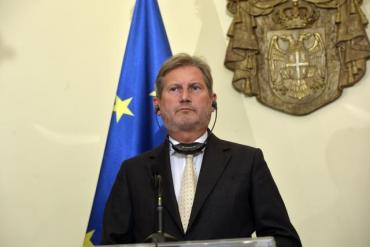 Commissioner for Enlargement and European Neighborhood Policy Johannes Hahn said in Brussels on Monday after two more chapters in Serbia's EU accession talks had been opened, Beta has reported.

Hahn was asked by Beta's reporter to make a comment on a decision by heads of state and government to include the Western Balkans in their agenda for a session scheduled for March 9 and March 10, over concerns regarding the deteriorating situation in the region.

The EU enlargement commissioner said he believed this was actually a very good thing, recalling that EU High Representative Federica Mogherini was scheduled to visit Serbia and a few other Western Balkan states next week.

"This is a very good sign of increased interest in the Western Balkans by the European family, which is a good thing," Hahn said.

Hahn said that "everyone's invited to contribute to the region's prospects, instead of constantly looking back." He underlined that "what people, young people want to see is a better standard of living, reconciliation, opportunities to stay in the region, instead of moving out."

"Accordingly, all these efforts, including the opening of membership chapters, will contribute to moving forward in the EU integration," Hahn said.

Hahn underlined that for this reason, he thinks it is important that the Western Balkans is on the agenda of the EU leaders' meeting, and added that "only a week later regional prime ministers will gather, most likely in Sarajevo, to consider all issues."

According to him, everyone must think about "how shaken the situation over there is and what is necessary, what must be done, and where is the necessary statesmanlike activity and political leadership."