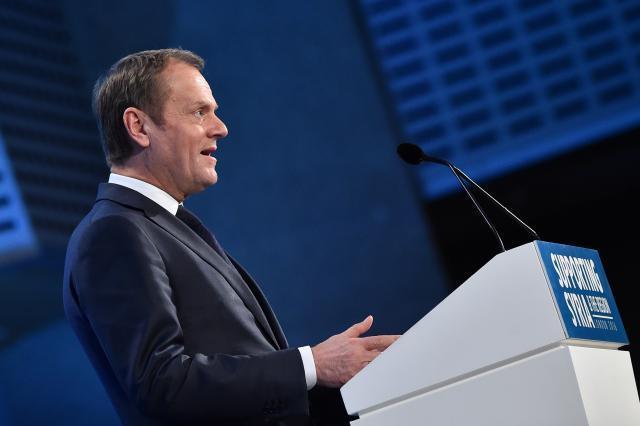 Tusk, who is president of the European Council, made these statements "in a letter to national leaders before a summit that he will chair on Friday to prepare EU's future after Britain leaves," Reuters reported on Tuesday.

Tusk, whom the agency describes as "conservative former Polish prime minister," also "called on Europeans to stick together to avoid domination by three other continental powers."

The letter, published on the European Council website, mentions three threats, the first being "an external one, related to the new geopolitical situation in the world and around Europe":

"An increasingly assertive China, especially on the seas, Russia's aggressive policy towards Ukraine and its neighbors, wars, terror and anarchy in the Middle East and in Africa, with radical Islam playing a major role, as well as worrying declarations by the new American administration all make our future highly unpredictable. For the first time in our history, in an increasingly multipolar external world, so many are becoming openly anti-European, or Eurosceptic at best. Particularly the change in Washington puts the European Union in a difficult situation; with the new administration seeming to put into question the last 70 years of American foreign policy."

The other threats, as identified by Tusk, include "an internal one, connected with the rise in anti-EU, nationalist, increasingly xenophobic sentiment in the EU itself," and, "the state of mind of the pro-European elites."

"The disintegration of the European Union will not lead to the restoration of some mythical, full sovereignty of its member states, but to their real and factual dependence on the great superpowers: the United States, Russia and China. Only together can we be fully independent," he wrote, and added:

"We must therefore take assertive and spectacular steps that would change the collective emotions and revive the aspiration to raise European integration to the next level."