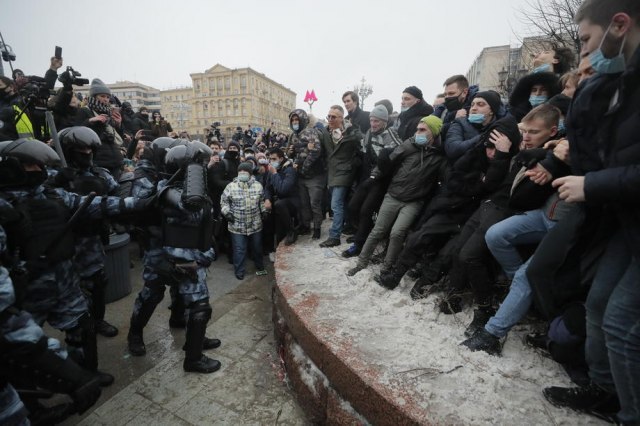 However, the Russian police announced that about 4.000 demonstrators had gathered, Russian news agency TASS reports.

TASS writes that police officers on the ground continue to warn that the rally is illegal, while arresting the most active participants.

From Moscow to Vladivostok, supporters of the famous anti-corruption activist, who is believed to have been poisoned this summer, have announced calls for gatherings in 65 Russian cities.

Demonstrators in Moscow clashed with the police which sent the message: "Dear citizens, this gathering is illegal. We do our best to ensure your safety. Be careful and, if possible, leave the illegal event," Index reports.

Under Russian law, a request for approval to hold a protest must be sent to local authorities at least 10 days before the event.

Among the arrested are Alexei Navalny's wife Julia Navalnaya and his associate, lawyer Ljubov Sobol.

Julia Navalnaya posted a photo on Instagram with the text that she is in detention.

Russia's TV Rain announced that its cameraman and journalist were detained while reporting from the apartment above Pushkin Square.

The first demonstrations were held today in the Russian Far East and in Siberia. Thousands took to the streets in Vladivostok and Khabarovsk, Novosibirsk and Chita, and strong police forces were deployed, Navalny's supporters report.

Navalny, who is the most prominent political opponent of Russian President Vladimir Putin, was arrested on January 17 when he returned from Germany to Moscow, where he spent five months recovering from severe poisoning by nerve agent, for which he blames the Kremlin.

Authorities say that by staying in Germany, he violated the suspended sentence according to the criminal verdict, in a case that Navalny says is illegal, so the court will decide in early February whether he will serve a sentence of 3 and a half years in prison.

Massive crowds in central Moscow right now, chanting “All for one and one for all!” pic.twitter.com/NKIaelChO6

"So far, we know that 42 members of the security forces were slightly injured," according to official sources, reports TASS.

Police have launched an investigation into the attacks on police officers, said Julia Ivanova, a representative of the Moscow office of the Investigative Committee.

"The investigation will establish the facts about illegal activities, actions and the people behind them," Ivanova said.

At least 1,090 have been arrested at protests around Russia against @navalny's jailing pic.twitter.com/sRp2BtOl3v