Hurricane Lorenzo hits the Azores Islands in the mid-Atlantic; PHOTO/VIDEO

The Category 2 Hurricane Lorenzo hits the Azores Islands, an archipelago in the mid-Atlantic, followed by heavy rainfall, strong wind and high waves 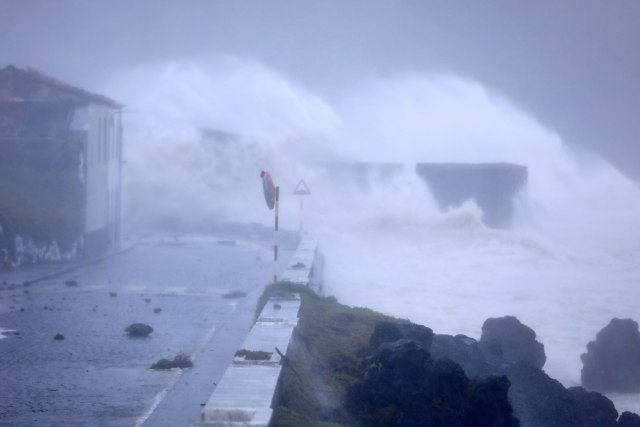 The Azores Civil Protection Agency said that the two westernmost islands had suffered minor damage, while hurricane felled trees and power lines, but no injuries were reported.

Around 250,000 people live on the nine volcanic islands.

The Portuguese weather agency reported gusts of up to 90mph, lower than forecast as Lorenzo lost power over cooler water.

Hurricanes the size of Lorenzo are rare so far north and east in the Atlantic basin. Hurricane Lorenzo is producing huge swells across the North Atlantic as it moves north east toward Ireland and United Kingdom.

B92 Reporter: Wind literally carries everything

The five central islands are on red alert for high swells, while B92 reporter is presently at Terceira Island, one of the nine islands of the Azores archipelago.

As he reports, Terceira was hit last night with hurricane Lorenzo that would pass over Atlantic Ocean for the next couple of days, while it will remain on this island until this evening. Islands Flores and Corvo might not be so lucky, as besides high winds and rough seas, those islands are forecast to be drenched by torrential rains, and are at the epicenter of the impact.

"Heavy rain started falling and it's getting worse. We were prepared for bad weather conditions yesterday, while the flights were cancelled", our reporter says.

Waves up to 22 meters (72 feet) high and hurricane wind gusts over 200 kilometers mph (124 mph) are forecast for some islands.

"I am not in a position to make good video as if I go outside on the terrace, the wind carries me - literally. I have to hold on to something so that the wind doesn't lift me off the ground", our journalist describes the current situation.

All hurricane related news are available on the website of the agency IPMA - Delegacaoo Regional dos Acores.