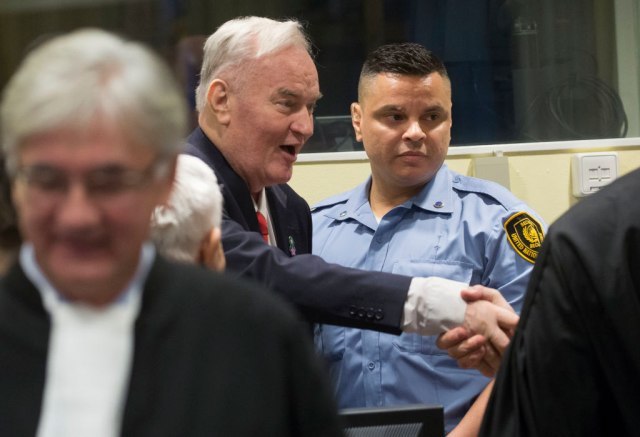 According to the paper, Russia is ready to offer medical treatment to him and take all necessary security measures, which was discussed at the UN Security Council session, along with the report on the work of The Hague tribunal, said Gennady Kuzmin, Russia's deputy Permanent Representative to the United Nations Office.

In July, Kuzmin also said in the Security Council that Russia is concerned about Mladic's health, because there is no confirmation from independent sources that he is receiving adequate medical care in The Hague detention center.

Ratko Mladic's son, Darko Mladic, told "Novosti" that a delegation of parliamentarians from the Russian Duma visited his father ten days ago and that they personally made sure he was not feeling well.

"They visit him from time to time and, although they are not doctors, they can see that he is not feeling well. Ratko's health is deteriorating and it has weakened significantly in recent weeks. He needs treatment in hospital conditions, not in detention”, he said.

Mladic had faced with serious heart problems, high blood pressure, and has survived several strokes. Some media outlets have reported on earlier occasions that a previous recording of his head finding revealed changes to his brain that had not occurred before.

His health status, or whether he was receiving an adequate medical care in The Hague, was discussed in February this year at a status conference before the UN Resident War Crimes Mechanism.

As RS media reported at the time, Mladic warned the Chamber at that status conference that the clock was ticking for him, and he complained that he did not understand the medical findings given to him, and that he was even more confused by the diagnoses in which it is written that his condition is stable, although even getting him out is quite risky.

Ratko Mladic was sentenced to life imprisonment in the Hague Tribunal in 2017 for being found guilty on all counts except the first one concerning genocide in six municipalities of Bosnia-Herzegovina.