Vučić at manifestation: I will not allow us to disown Serbian people VIDEO / PHOTO

On the Day of the Ministry of Internal Affairs and the Day of the Police, President of Serbia, Aleksandar Vučić, is also attending main manifestation. 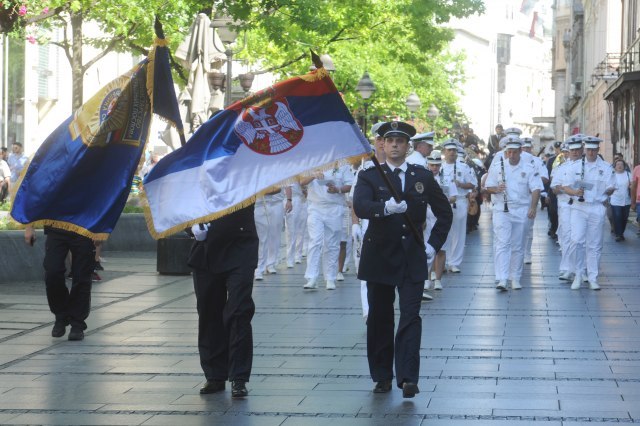 In addition to the President of Serbia, the Prime Minister of Serbia Ana Brnabić, Minister of the Interior Aleksandar Vulin, ministers in the Government are also attending the central event...

The event is being held on the plateau in front of the "Serbia" Palace.

Earlier, the Minister of Internal Affairs, Aleksandar Vulin, announced that more than 2.000 police officers would take part in the ceremony, who would show their training.

At the central manifestation, 1.337 members of the Ministry of the Interior who were hired in the last year took the oath of office. The President of Serbia performed an honorary review accompanied by the Minister of the Interior with the beats of the march "Greetings to the Commander".

After the ceremonial parade of members of the Ministry of the Interior, the anthem of Serbia "God of Justice" was sung.

At the beginning of the manifestation, the Minister of Internal Affairs, Aleksandar Vulin, addressed them, saying that they took people out so that Serbia could see who was guarding us, "who is making Serbia's days peaceful".

"We brought the youngest in front of you, and we will wait to call them the best," said Vulin. "You who take the oath today, take good care of every word. Keep the honor and face of every man, even the one who lost his honor and face. You will use weapons only when you have to, but you will not humiliate anyone," Vulin emphasized. After the address of Aleksandar Vulin, medals for merits were handed over to the members of the Ministry of the Interior. The Director of Police handed over medals to the deserving employees of the Police and distributed recognitions for their work and service in the promotion of the police.

The President of Serbia, Aleksandar Vučić, presented medals for bravery.

After the presentation of the medals, the President of Serbia, Aleksandar Vučić, addressed them and said that he would not allow anyone to give up the Serbian people.

"It is a great honor for me to be able to speak here today and it is difficult to speak after the minister of interior because he always speaks with inspiration. I am the president of Serbia and all its citizens, but I will also never allow us to give up the Serbian people just because we belong to the same family. I will fight to help the Serbian people. Serbia must also take care of its own kind, and there is nothing more natural, like loving children and family, loving your country," Vucic said. He added that it is important to have a strong police, just as it is important to have people who help us during any natural disaster, because people always turn to the Serbian police to solve their problems. "You are the ones who guard and protect the state. You are the ones who keep peace and order." Vučić emphasized that no one's position anywhere in the country must prevent the law from being enforced. "No one's position anywhere in the country must prevent you from carrying out the law, and for you the law is simple. Everyone who violates it, who deals with crime, corruption must be held accountable. That way we will have the trust of the citizens," the president said.

Serbia must also take care of its family, he said.