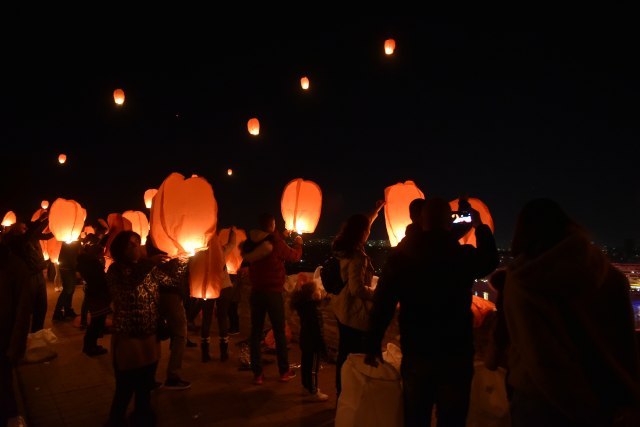 There were thousands of people on the Rainbow Bridge, and boats with torches lit up the river.

Symbolically, with lanterns soaring into the sky, and with rosemary, along with Balašević's songs accompanied by a choir of Serbian National Theater and the last greeting from the Danube boats, Novi Sad paid tribute to its Pannonian Sailor.

The image of the beloved singer-songwriter was projected on the walls of the Petrovaradin Fortress on the Quay with his "Recruiting song" playing in the background.

The coast was full of white roses brought by Balašević's fans, and they greeted each song with applause.

The gathered people started singing with the next song "Life is a sea", and later they clapped their hands in rhythm with the hits of the great Balašević.

At one point, the choir began to sing "Slovenska" and the audience joined it. Candles were lit on the banks of the Danube, while fans played music.

The news of the death of singer-songwriter Djordje Balasevic echoed not only in the region, but also in the whole world. From that moment, friends, colleagues and people from all former republics said goodbye on social networks.

Djordje Balasevic was mourned across the whole region of former Yugoslavia, with fans gathering in many cities accross the Balkans, invoking fond memories of Balasevic's famous concerts.

Fans left flowers and lit candles, along with tangerines and plush toy rabbits at all the memorial gatherings in reference to one of his early songs.

Since the death of Yugoslav leader Josip Broz Tito, the death of no public figure has been marked across the region as Balasevic's death, whom many consider to be a beacon of free thinking.

The city authorities declared a day of mourning on Sunday, when he was buried, with family and small circle of friends attending the funeral.

All the lights on the City Hall were turned off, and the flags were lowered to half-mast.