The awarding ceremony of decorations to deserving citizens, individuals and institutions, on the occasion of Sretenje, was held in the Presidency of Serbia. 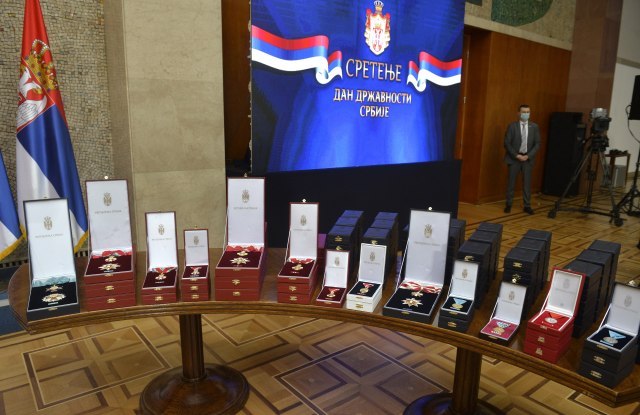 President of Serbia, Aleksandar Vučić, who presented the decorations on the occasion of the Statehood Day of Serbia, said that Sretenje is a great day for Serbia, the day when the modern Serbian state was born.

At the ceremony in the Palace of Serbia, President Vučić said that Sretenje is also our primer and textbook, a time of reconsideration, a time of unity of our people, wherever they live - in Serbia, Republika Srpska, Montenegro, Northern Macedonia, Slovenia, Germany, Austria, Switzerland , Russia, America ...

Speaking at the opening of the ceremony, Vucic said that all the individuals and institutions that have been awarded decorations will be role models for coming generations and provide guidelines for everyone dreaming of great deeds. “You will be an example to the good, decent and successful Serbia and your lives will be more complicated,” the president said.

President Vucic reiterated that it was the day when the great leader, and the people's man Karadjordje, raised an uprising against the Turks, but also the day when, thanks to Milos the Great and Dimitrije Davidovic, Serbia adopted a modern and liberal constitution - a constitution ahead of its time.

"Forty days after Christmas, we celebrate Sretenje, the most important date in the historical, political and religious calendar of our beautiful Serbia," Vucic said.

Vučić pointed out that because of that, today we are proud of our past and ancestors, but looking at them, Serbia is focused and ready to work for the future of its children.

"This is a holiday of all those who love and live for their Serbia, this is a holiday that inspires our people in the crucified Kosovo and Metohija and which gives them strength for the survival of the Serbian hearth, Serbian name and surname, where it is most difficult," Vucic said.

Among the laureates who received decorations at the Palace of Serbia are film director Emir Kusturica, frontman of the group "Riblja corba" Borislav Bora Djordjevic, as well as Russian sculptor Aleksandar Rukavishnikov, author of the monument to Stefan Nemanja.

Among the winners of the Sretenje awards is Patriarch Kirill of Moscow and All Russia. President Vučić awarded him the Order of the Republic of Serbia on a large necklace for outstanding merits in developing and strengthening friendly relations and cooperation.

Nikos Christodoulidis, Deputy Head Director of the Cypriot President's Diplomatic Office and the Beijing Institute for Genetic Research were awarded the Order of the Serbian Flag of the first degree.

Nine Chinese doctors who fought side by side in our country against COVID-19 with our health workers will also receive Sretenje recognition.

The awarding of the Gold Medal for merits and deeds of personal heroism was a particularly touching part of the ceremony. Family members came for the medals, because it is a medal that was posthumously awarded to medical workers.

Thus, instead of her mother Mirjana, her daughter Jelena Vignjević received the medal. Jelena's mother Mirjana was a professional nurse in Negotin.

After Jelena, Uroš came on stage. Uroš's father, Dr Slobodan Blagojević, was the head of the temporary COVID hospital in Čačak. He fought with coronavirus for 15 days, but unfortunately he lost the battle on December 20. Uroš received his father's medal and deserved a huge applause.

Then Radmila Bjelica came on stage. She came to receive a medal for her son Marko. Marko was a medical technician. He worked in the red zone of the KBC "Bežanijska kosa" and treated patients with the coronavirus. He died after several days of fighting this virus at the age of 41.