Monument to Stefan Nemanja unveiled; Vučić: "It's huge as they should see us through it. We tried to raise Serbia from the ashes". 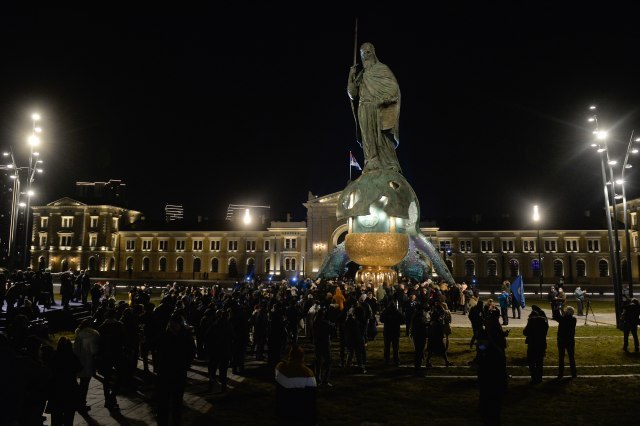 President of the Republic of Serbia, Aleksandar Vučić, addressed those present at the ceremony.

Vučić first mentioned the late Patriarch Irinej: "I want to thank Patriarch very much for everything he has done for our people".

"In the previous eight years, we tried to raise Serbia from the ashes," said Vucic.

"I am especially happy tonight. Just as we are unveiling this monument today, on St. Sava's Day, we have managed to complete the largest Orthodox church in the world - the Church of St. Sava, and so will Hilandar. We have also managed to rebuild the country economically and unite Serbian nation".

As he says, he presents this monument to Stefan Nemanja as a great statesman. "Prior to him, we were a tribe. This is not just an act of revealing to the father and creator of the state, this is a kind of act of taking care of ourselves and our identity. To stand here in front of the great Stefan Nemanja means a kind of repentance for all the years of oblivion," Vucic stressed.

This monument, he says, is great because the story of us is great.

"It is first and foremost a story about us - about who we were, but also about what we are today and what we want to be. As Nemanja built endowments throughout Serbia, so we must build Serbia," the president said.

"The word Serbia is not ours - they created it by creating us and we must never forget that. There is a lot of blood and a lot of lead in the word 'Serbia'. That is why, in the end, this monument is dedicated to him and to Serbia."

This monument, he says, is huge, because everyone should see it and see us through it - upright and proud, people ready to work and build, friends who do not want to take anything from anyone, but who will defend what's ours.

"I also want to thank the people from Belgrade Waterfront who turned this square from an ugly site into the most beautiful place," said Vučić.

Vučić thanked Dodik and all other associates of Serbia.

He is especially grateful to Alexander Rukavishnikov, the creator of this monument, whose works adorn the whole of Russia.

"I hope that Sava Square will become the most beautiful public space in Belgrade," said Vucic.

Dodik: Today's Serbia is more and more advanced, it should be proud of economic progress

The Serbian member of the Bosnia-Herzegovina presidency also addressed the gathered.

"Today, I am especially proud to share with you this magnificent moment in which all Serbs pay tribute to the unifier of all Serbs, Stefan Nemanja. Serbs have long ago learned that there is no freedom without a state. Even today, we are fighting under modern circumstances," Dodik said.

He said that the medieval part of our history remained repressed, and that the time had come for us to return to our core values.

"Today's Serbia is more and more advanced, we see progress at every step. We from Republika Srpska are looking at Serbia's progress and we are always happy when we can contribute to it. I am grateful to President Vučić for understanding not only us in Republika Srpska, but also for all Serbs in Montenegro and everywhere", Dodik said.

He says Serbia should be proud of its economic growth, and that Republika Srpska is trying to keep up.

Russian Ambassador to Belgrade Aleksandar Botsan Kharchenko, representatives of the diplomatic corps, Banja Luka Mayor Drasko Stanivukovic, leaders of the Democratic Front Andrija Mandic and Milan Knezevic, as well as the President of the Democratic Party of Serbs in Macedonia and MP Ivan Stojiljkovic were also there.

A video beam was set up on the Square, from where a film about Stefan Nemanja, his significance for Serbia and the creation of the monument was broadcast, and during the evening, lighting was gradually released on the square, around the monument and on the monument itself.

Although it was not announced, citizens gathered on the Square, and a large number of media teams attended this event.

Due to the unveiling ceremony of the monument, the public transport regime was also changed from 5 pm to 10 pm.

After the ceremonial unveiling of the monument, church bells rang from all Belgrade sanctuaries.

The monument, which is the work of Russian sculptor Alexander Rukavishnikov, is 23 meters high and weighs about 80 tons. It was completely done in Moscow, and its installation began in August last year.

The monument to Stefan Nemanja was completed at the end of December 2020, and then, according to the deputy mayor of Belgrade, Goran Vesić, "it became the property of the people".

What do the symbols on the monument represent?

Minister of Foreign Affairs, Nikola Selaković, was involved in the erection of the monument from the very beginning, so he explained to TV Prva audience what the symbols we can see on the monument represent.

Reconstruction of Sava Square began in August 2019, and the leaders announced it as a "new city center".

By relocating the roads to the edges of Sava Square, pedestrians are left with a space of about 20.000 square meters on the square itself, on the podium and on the ground floor around the former building of the Main Railway Station. A total of 250 trees, water sprinklers and a "drop by drop" system for watering flowers and green plants will be planted on the grassy areas.

Also, the Post Office on Sava Square will be reconstructed and will regain the look it had before the Second World War.