The monument to one of the most important Serbian rulers, the Grand Prince Stefan Nemanja, will be ceremoniously unveiled today, on Saint Sava Day, January 27. 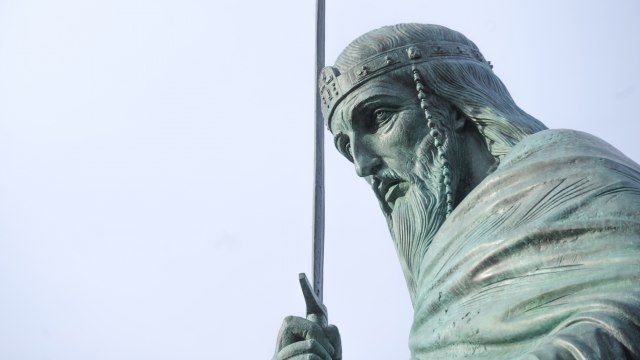 The monument of imposing dimensions was made in bronze and is the work of the Russian sculptor Alexander Rukavishnikov, an active member of Russian Academy of Arts and a head of sculpture department in The Surikov Art Institute. The monument was delivered from Moscow to the Serbian capital successively, in parts.

About ten Russian masters took part in the installation of the monument, which began in August last year, along with local workers who were in charge of the reconstruction of the square itself.

The monument is 23.5 meters high and five meters below the ground, weighs about 80 tons, and the pedestal is a kind of open-air museum, because around the scepter of the monument are mounted fragments of a Byzantine helmet with mosaics on the inside that represent parts of Stefan Nemanja's life.

The plateau around the monument is paved with stone cubes more than 100 years old, which were found during the works in the immediate vicinity of Sava Square.

The monument that was erected differs from the one that won the competition, because Stefan Nemanja now holds a sword in one hand instead of a cross, which Professor Sima Avramović explained by saying that Stefan Nemanja was the founder of Serbian statehood and spirituality, but that the idea of statehood prevailed, which was not achieved by the Russian cross but, as always, by the sword.

The Belgrade Secretariat for Public Transport announced that during the ceremonial unveiling of the monument, the regime of public transport will be changed today from 5 to 10 p.m.

Tram lines 7, 9 and 12 are being abolished, and 6 and 11L are being strengthened. On the stretch Youth Stadium - Banjica, tram line 9L is being established, while tram lines 6 and 14, as well as lines 11L and 13 will work on their routes without changes.