Local politicians rolling up their sleeves: Which vaccines did they choose?

Local officials, by personal example, lobby for vaccination from the front lines. As the three vaccines are registered in Serbia, they choose different ones. 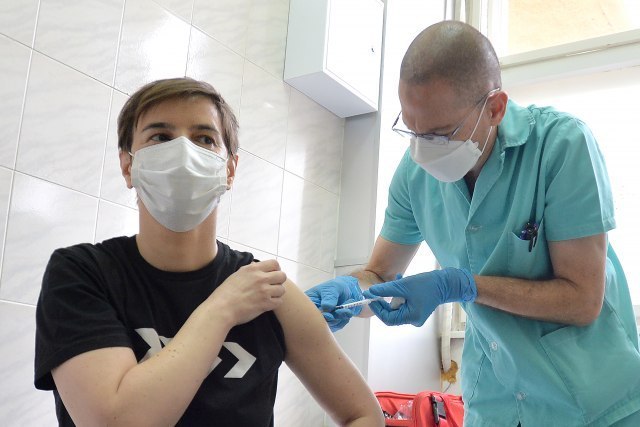 The beginning of 2021 was marked by the question: which vaccine to choose? Looking at our politicians, who wanted to point out the safety of vaccines of all three manufacturers - none of them was neglected.

In the hope that she would encourage the entire nation and confirm the importance of immunization, Prime Minister Ana Brnabić was the first to be vaccinated. Late last year, she received the Pfizer vaccine.

"Today is definitely a day for smiles, finally we have a reason to smile since March 6. This is the day that marks the beginning of the end of the pandemic in Serbia. As Prime Minister, I felt the need to be the first to receive the vaccine, to show that I trust all experts who checked the vaccine", the Prime Minister pointed out on that occasion.

After that, the members of the Crisis Staff for combating the Infectious Disease COVID-19 did the same: Dr Predrag Kon and the Minister of Labor Darija Kisić Tepavčević, as well as the former Minister Rasim Ljajić got vaccinated. Dr Kon, who recently received the second dose of the vaccine, notes that it doesn't matter which vaccine we receive. Earlier this year, the Russian vaccine was received by Serbian Parliament Speaker Ivica Dacic and Police Minister Aleksandar Vulin. Apart from them, Sputnik V was also the choice of the State Secretary of the Ministry of Health, Mirsad Djerlek.

"As I firmly believe that the earth is round, so I believe that the vaccine is good and that everyone should receive it. I wanted to get a Russian vaccine because I believe in Russian medicine," Minister Vulin said on that occasion.

Dacic said that he received the Russian vaccine as part of an earlier agreement between him, Serbian President Aleksandar Vucic and Prime Minister Ana Brnabic, that each of the highest state officials should receive vaccines from different manufacturers "in order to increase citizens' trust in the vaccination process." He said that no one would believe him that it was not a matter of political reasons that he received the Russian vaccine, and he emphasized that he wanted to support public health by vaccinating.

Yesterday, the Minister of Health, Zlatibor Lončar, became the first man in Europe to receive the Chinese vaccine.

After Minister Loncar, the director of the Security and Information Agency (BIA), Bratislav Gasic, and the Minister of Defense, Nebojsa Stefanovic, also received Sinopharm's vaccine. This vaccine is also the choice of the Minister of Finance, Siniša Mali, who applied for the vaccination electronically today.

"I am here today, on the great Christian holiday of the Epiphany, together with members of the Serbian Army, to receive the vaccine with one wish - for this to be the beginning of the return to normal life in Serbia," concluded Minister Stefanović.

Sinopharm vaccine was chosen by the First Deputy Prime Minister and Minister of Education, Science and Technological Development Branko Ruzic, but also by the President of Serbia Aleksandar Vucic, whose vaccination is expected this weekend.