Serbian and Croatian seismologists: Devastating earthquakes in the Balkans await us

In the next 10 to 15 years, it can be expected that a very strong earthquake will happen again in the Balkans, seismologist Slavica Radovanović says. 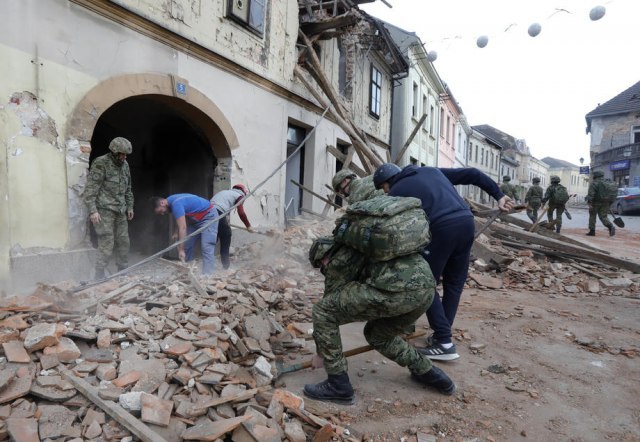 According to her, it is difficult to say where these earthquakes will happen, but as she says, there are areas in Macedonia, Bulgaria, Romania, and even in eastern Serbia where there were no earthquakes for many years.

She told Telegraf.rs that Croatia should not expect a stronger earthquake than the one that hit it yesterday at 6.3 on the Richter scale, and that such an earthquake is not expected in the vicinity, but that this earthquake is another proof that the cycle of strong earthquakes in the Balkans has obviously begun.

"Why is this happening? Because the seismic activity on the Apennine Peninsula had several strong Italian earthquakes. The seismologists said then that this seismic activity would surely spill over in the Balkans where there were no strong earthquakes for many years, especially in that coastal part where the last one was in Montenegro in 1979. So, after that, there was Albania which also did not have strong earthquakes for many years. Then seismic activity started near Zagreb, with two strong tremors yesterday, and this earthquake today near Petrinja", Slavica Radovanović, former director of the Seismological Institute of Serbia, and now director of the company seismo.sr, stated.

According to her, when the earthquake near Zagreb happened last spring, the fragile balance that existed was disturbed, so these two earthquakes happened yesterday near Petrinja and this one with a magnitude of 6.3 on the Richter scale. The maximum expected magnitude for Zagreb is also over 6 on the Richter scale, as this one was in Petrinja, but there are no two earthquakes of such close magnitude, neither spatially close to each other, nor temporally, she explains.

As she says, more significant time needs to pass in order for such a strong earthquake to be renewed in that same region, for example, Zagreb-Petrinja area.

That is why, she adds, no one in that area has reason to be afraid now. However, there are other areas on the Balkan Peninsula where there have been no strong earthquakes for a very long time, and seismic activity has grown slightly.

"When I say on the Balkan Peninsula, it means even from Istanbul, from the very end of that area, where there were no strong earthquakes for a long time. Throughout history, there have been situations where several strong earthquakes have occurred in a few years. Remember 1963, when it happened in Macedonia, then in Banja Luka in 1969", she stated.

It took several years for a strong earthquake to occur, conditionally speaking, in the same area.

"Now we can expect in the next 10 to 15 years that an earthquake of very high magnitude will happen again in another part of the Balkans, while in Serbia earthquakes do not have such high magnitudes as in Petrinja. Our maximum earthquakes had magnitudes up to 6 on the Richter scale", she stressed.

In this context, Radovanovic says, seismic activity in the Balkans has apparently begun.

Tomislav Fiket, deputy director of the Croatian Seismological Service, says that the problem now is that yesterday's earthquake, which was strong, released a large amount of energy. "We know whether it will act on other critical points and activate them. It is ungrateful to predict that, we hope it will not," says Fiket, emphasizing that there are no predictions for earthquakes.

He also notes that there was a long period of seismic inactivity, and now we have increased activity, but in Croatia such series of earthquakes are rare.

"We are aware that we spent a considerable amount of time, more time than usual for this area of Zagreb, when things were calm for a long time. The longer this inactivity lasted, the more nervous we got because we knew there was a real danger that an earthquake will happen”, Fiket said.