"The situation is still extraordinary"; "No one will organize celebrations" VIDEO

Epidemiologist Dr Predrag Kon stated that the situation is still extraordinary, regardless of the numbers, which are somewhat more favorable. 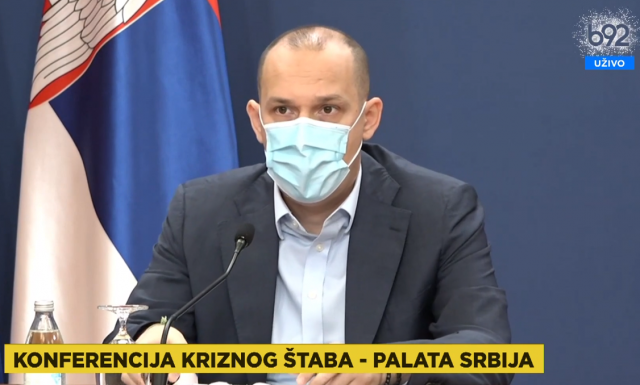 "There is no gathering, even in private, and we should refrain as much as possible from mass celebrations. Regardless of that, we should welcome New Year. We should keep our health and be better in the New Year, this year will not happen again," he added.

A member of the Crisis Staff, Dr Branislav Tiodorović, stated that he understands to some extent those who want to celebrate.

"On the one hand, we must understand the need for people to send off a difficult year, and to welcome the New Year with a new view of the future. Therefore, I understand those who want to celebrate, but let them do so with respect for measures," he said. He added that Serbia is among the first three European countries to start vaccination, and that we should ensure that the collective immunity is higher than 60 percent in the next two or three months.

The commander of the VMC "Karaburma", Ivo Udovicic, said that he had nothing against the celebration of the New Year, but he appealed to the citizens not to get in a situation to regret their whole life because of a few hours of fun.

He pointed out that in the last month, that institution received and discharged 300 patients, and that there are currently 13 patients in the intensive care unit who are vitally endangered.

"However, the story does not end there, because as far as we know, the effect of the vaccine lasts for about six months," said Loncar, adding that we would have to prepare for a serious vaccination in the fall, and early next year.

He pointed out that the vaccination plan has been developed.

"Citizens older than 60 are the most endangered, as well as those in nursing homes, then it is the turn of health workers who work in the COVID-system, then those who are not ill. The third category are educators because they are in contact with children, the next state officials, police, army, and chronic patients, that is the plan of the state", Lončar said. He added that the controls for New Year's Eve will be rigorous and that the celebration will not be "at all costs". As he said, the police will evict everyone they find after 6 pm in the catering facility, and the facilities will be closed. Tiodorović added that it doesn't matter if it is a night or day party, the consequences for both are fearful.

Dr Predrag Kon pointed out that there were two turning points in the fight against the coronavirus when the equipment and respirators arrived and the opening of the COVID hospital in Batajnica.

He cited the death of a close friend as the most difficult moment. He pointed out several times that next year will definitely be better.

Commander Ivo Udovicic mentioned the most difficult moment when he intubated a known patient, and the happiest moment when he extubated her and sent her home. For Tiodorović, the most difficult moment was the tragic situation in Niš, in the Gerontology Center, but he stated that the case was in the process and they did not want to talk about it. As for the daily parties, Kon pointed out that everyone who does that "violates prescribed measures".

"Everyone who does that is in violation, wherever there are more than five people in one place. It must be understood that it is a risk," he said, adding that the other thing is private parties, where one can only appeal to refrain from them.