We'll endure 2 days of harsh measures; the Russian vaccine is being tested by Torlak

President of Serbia, Aleksandar Vučić, said that he was absolutely convinced of the victory against the coronavirus, despite the terrible days behind us. 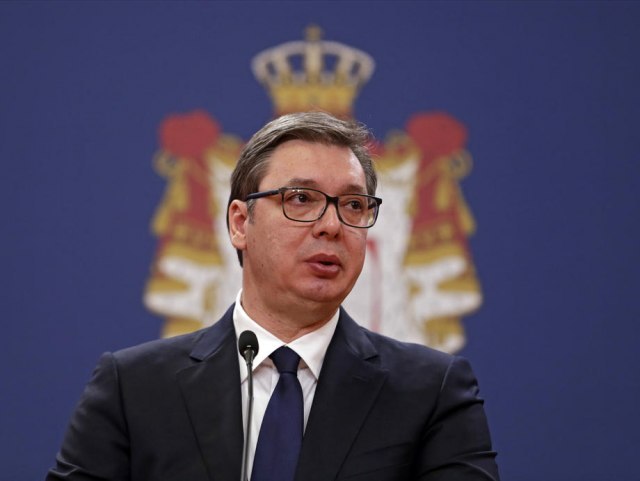 "Despite the terrible days behind us and no less difficult, at least for the next few days and weeks, we will win this battle", he told RTS.

He said that he sees optimism in our discipline, responsibility, fighting spirit, desire to defeat a vicious disease, and in vaccines that are slowly getting necessary permits.

"Serbia is coping and will manage, I believe that we will not be in the other half of the countries that will provide that vaccine," he said.

As he said, he is proud of the construction of the COVID hospital in Batajnica.

"Don't forget, we laid the foundation stone on the first of August. It will be opened on December 3," he said.

Vučić showed photos of people burning electric switches with lighters at that hospital.

"I don't understand that someone wants to do something against the treatment of patients, it was incomprehensible to me. The Ministry of the Interior and the BIA are investigating that because it is obviously a matter of sabotage," Vucic said.

"We've even faced things like that, because there are people who don't want us to show that we can be efficient. I don't understand anyone doing that," he said.

Vučić reported that State Security Agency (BIA) and the Ministry of Interior are now investigating this and said that he was sure that they would catch the perpetrator of this "pure" sabotage.

Asked whether the price was a criterion in the realization of that project, Vučić said that it is done through state bodies. He referred to the malicious allegations that a square meter cost 2.000 euros and said that the price of a hospital square meter was 1.171 euros per square meter. "If we had gone through the Public Investment Office, the price would have been 1.050 or 1.060 euros per square meter, but it would have lasted two years, and we wanted it to be faster, in order to save people's lives," he explained. Vučić said that he wonders what is in the head of those who think that someone is getting rich over the construction of a hospital.

"What could it be but the idea of him doing it?" "For someone who loves and fights for his country, above all for older people, that could not have occurred to him," he pointed out.

Vučić said that he did not even know how many times he was in Batajnica, adding that it was more than 10 times.

COVID Hospital in Krusevac will be opened on December 17.

He stated which hospitals in Belgrade have been renovated in recent years, such as "Dragisa Misovic", the hospital in Zvezdara, the construction of "Dedinje 2". "We are building and renovating 19 general hospitals in Serbia, from Kikinda, Vranje, to Smederevska Palanka, Loznica and Prokuplje," he said. Vučić added that he was proud of those achievements. "Tomorrow is an important day for us, this opening of the hospital in Batajnica, to rise like a phoenix from the ashes," he said. He called on people to unite against the coronavirus, instead of partnering with the virus against Serbia.

"Let's unite in the fight against coronavirus, it is our enemy. Many did not understand how severe the disease is," said Vucic.

The President of Serbia, Aleksandar Vučić, says that our country has one of the highest estimates of hospitalization of COVID patients in the whole of Europe, and that only the Czech Republic can compare with us.

Speaking on RTS, he said that we have much fewer dead than in the countries of the region and Europe, if we look in proportion to the number of inhabitants, and that our medical workers are most responsible for that. The percentage of hospitalization is very small in the strongest western countries, because hospital treatment is expensive there, he stated. He says that in Germany, that percentage of hospitalization is between 1 and 4 percent, in Croatia and Slovenia between 5 and 10 percent, while in our country it is between 12.5 and even 38 percent.

"Today, our percentage is lower, because we do not have more capacities and that is why I am terribly scared, and that is why I asked and prayed to God to help, as well as our workers, so that we can hospitalize more people," Vucic said.

He stated that we have lower mortality rate thanks to our doctors and the therapy they use.

He also points out that we have almost three times less dead than Bulgaria. As he said, we currently have 8.000 people in COVID hospitals, while Croatia has about 2.500, but Croatia is 1.8 times smaller than us, not three times smaller. Vučić says that we have a total of 120.000 medical workers, and up to 23.000 or 24.000 in the COVID system. He emphasized that the salaries of people in health care have increased a lot, and for nurses, cumulatively as much as 26 percent.

"It is important that we try to provide vaccines in the coming period and let the citizens choose. Each vaccine is good, no matter whether it is registered in Great Britain, the USA, the EU, Russia, China...", Vucic emphasized.

As he said, it is important for us to try to provide vaccines in the coming period.

"Let people take whatever vaccine they want. Each of the vaccines is good, we will take care to get it," he said. He added that the Russian vaccine had arrived and would be tested in "Torlak" in the coming days and weeks. He announced the first quantity of Pfizer vaccines by the end of the year, and 350.000 doses by the end of February in Serbia.

"All vaccines will be free," he said, adding that Pfizer vaccines are arriving in powder form.

"No one is crazy to give a vaccine and poison the people, especially if they come from important countries. Let's get serious and not fall for conspiracy theories," he said.

He explained that the "Batut" Institute is making a vaccination time table, first health workers, the army, the chronically ill and the elderly. “I hope we get enough for the first round,” he said. "We cannot be the first in the world, nor the second, but we can be in the first half of the world," Vucic said.

"We received these concrete measures two and a half days ago," he said.

Vučić said that different views were on whether to accept all the measures of the Crisis Staff. "I said that we do not have better epidemiologists and that they are doing a terribly difficult job, yet these people are doing a fantastic job, and they get nothing in return, except that they are exposed to attacks," Vucic said. He added that there has been no shortage of any goods in our country since the beginning of the COVID crisis, and that we pay around 750.000 euros a day for tests. "There is no shortage of any medicine," he said. The political headquarters is taking care of how to save lives, said Vučić.

President Vucic promised one-off aid for 72.500 employees of travel agencies, guides, caterers and hoteliers, one minimum wage for each.

"We bring it as much as tomorrow, there will be a payment by the end of the year," he said. The decision was made that on December 17 and 18, there will be a payment of 5.000 dinars of one-time assistance for all pensioners. "From January 5, pensions will increase by 5.9 percent," he said. As he said, that is 75 million euros. President Aleksandar Vučić said tonight that the state is trying to pay off the entire loan taken from Azerbaijan for the road Čačak - Ljig before the end of the year.

"It is a difficult loan, a total of 300 million euros. We paid a little more than half, now we want to repay the complete debt, because it is not an easy interest rate of 4%, taken in 2011", Vučić said for RTS.

From those 170 million, Serbia will lower the public debt rate by 0.42 percent, to 57.4 percent of the budget, Vucic added.

He said that it will not burden the state treasury much, because he says that the deficit of about 8-9 percent is much smaller than in developed countries. He said that the European Commission also praises Serbia's economic measures. "We will not endanger anything with this, and we must find a way to help the private sector in the course of January," he said. He added that no tax-related measure would be adopted.