Decorations to members of the MoD and the Armed Forces; Vučić: You are special PHOTO 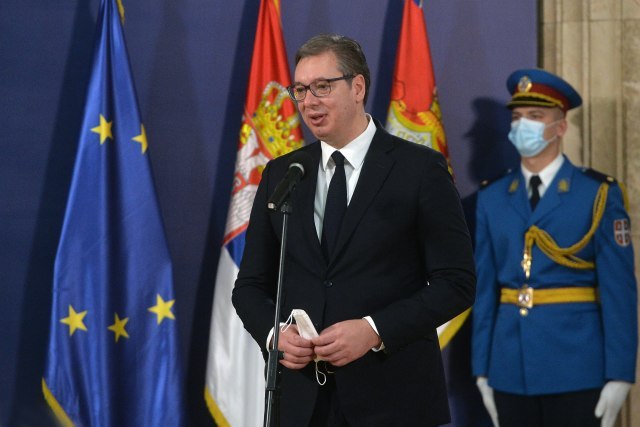 The decorations were presented for engaging in the implementation of measures to prevent the spread of the infectious disease COVID-19 and to help the civilian population. The medals were awarded on the occasion of the Day of Reconciliation in the First World War, as well as on the occasion of the 21st anniversary of the Battle of Košare.

President Vučić presented the Order of the White Eagle with second-degree swords to Lieutenant Colonel Dragutin Dimčevski, on the occasion of the anniversary of the Battle of Košare.

For merits in the fight against coronavirus, the Order of the White Eagle with Swords of the Third Degree was awarded to the Deputy Commander of the Training Command, Brigadier General Jelesija Radivojevic, as well as the Commander of the Temporary COVID ambulances at Belgrade Fair and Belgrade Arena, Colonel Radivoje Andjelkovic.

Vučić presented the Order of Merit for Defense and Security of the third degree to the manager of the Novi Sad Military Hospital, which is in the COVID system, Colonel Dragan Koruga, while Colonel Ivo Udovicic, commander of the COVID hospital of the VMC Karaburma, was awarded the gold medal for merit.

Colonel Zoran Smiljković, Commander of the Temporary Hospital "Cair" in Niš, was awarded the Gold Medal for Zealous Service, and the Silver Medal of Merit was awarded to the Head of the MMA Institute of Epidemiology, Colonel Srdjan Lazić, Head of the Infectious and Tropical Diseases Clinic of the MMA, manager of VMC Karaburma, lieutenant colonel Milan Mladenović.

Lieutenant Colonel Milan Jovanović, Head of the MMA Emergency Center, Lieutenant Colonel Negovan Ivanković, who was engaged during the implementation of tasks with members of the Armed Forces of the Russian Federation, First Class Sergeant Major Momčilo Marić, Head of the MMA Maintenance Service, were also awarded the Silver Medal of Merit. Miroslav Ljiljak, engaged in the implementation of security measures at the Home for High School Students "Patriarch Pavle" and the temporary COVID-hospital of the VMC Karaburma.

The President presented the silver medal for bravery "Milos Obilic" to Lieutenant Colonel Borislav Krnjajic, engaged in the implementation of measures to secure border crossings, migrant centers, as well as the reception of our citizens who arrived from abroad, and Captain Toma Zorzic, engaged during the implementation of tasks with members of the Russian Federation.

Addressing the decorated, Vučić said that they are no longer just sergeant majors, captains, lieutenant colonels, colonels and generals, but as of today they are holders of state recognitions and that each of them must now bare that in mind at any moment. "You are special, you have proven yourself to your country and people, and you have to fulfill that all your life with commitment and responsibility," the president underlined, asking the winners to wear their decorations with pride.

Vučić said that these are important and valuable decorations, not in a material, but in a human sense, which speak of how much their homeland Serbia is honor-bound with their work and deeds.

"We do not give many decorations, but in difficult times, those who are most valuable and who deserve to receive gratitude from the state always show themselves," he emphasized.

Vučić thanked the award winners for their work and dedication, and pointed out that decorations are something that always remains a source of pride for their families, because the state was able to recognize and decorate them for magnificent and exceptional works. "Your children and everyone around you can emulate your deeds. I want us all to have face with some easier times, so that you have to invest a little less effort and courage. But I am sure that you will find the best way to respond to all responsibilities and challenges", he said. He congratulated them once again on the decorations and said that the state does not expect anything less from them in the future.

The award ceremony was attended by the Minister of Defense Nebojsa Stefanovic and the Chief of the General Staff of the Serbian Army Milan Mojsilovic.