"We are monitoring the situation throughout Europe, new measures will be considered"

Prime Minister Ana Brnabić said that new measures were discussed at the session of the Crisis Staff yesterday, and that opinions within the Staff were different 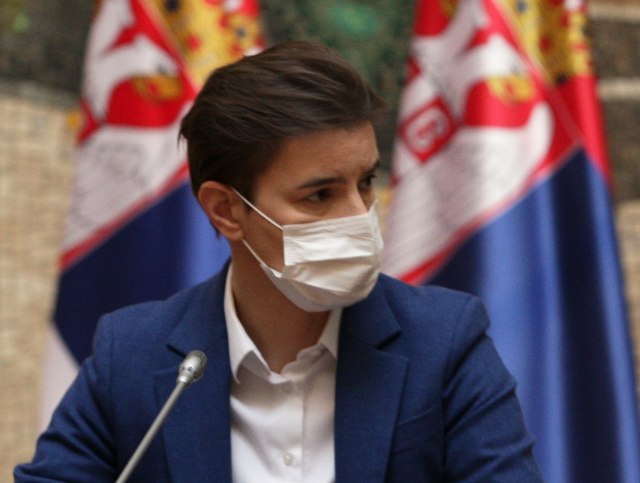 She stated that they are monitoring the situation in the whole of Europe, the introduction and relaxation of measures in the EU and beyond, and that they should be guided by that in relation to our situation.

"Later, I have a meeting with President Aleksandar Vučić, and together we will discuss some measures, we will talk about the constitutionality and expediency of some of the proposed measures, and we will see whether we will go to more restrictive measures, depending on today's number of infected," said the Prime Minister on TV Pink.

Brnabic said that the state would come out with new measures today or tomorrow.

She points out that, according to the numbers at 8 o'clock this morning, it seems that the day will be tough, but not as difficult as last Tuesday.

The Prime Minister pointed out that she would talk to "Pfizer" about the vaccine at 4 pm, that they talked to the Russians yesterday, and she also reminded that Vučić wrote to Xi Jinping about the Chinese vaccine.

When it comes to vaccines, Brnabić says that the entire state team is working on that, and that Vučić uses all his political connections, used to procure respirators at the outbreak of the epidemic, so we have them on the stock today.

"We are also negotiating the production of some of the vaccines in Serbia and I really don't see that anyone could put in more efforts than we do for the moment. We are doing our job with all our heart, and Vučić has given us the task to negotiate with all partners. We are specific as a nation because someone would like to receive an American, someone a Chinese, someone just a Russian vaccine. In any case, we want to provide all these vaccines to our citizens", Prime Minister concluded.