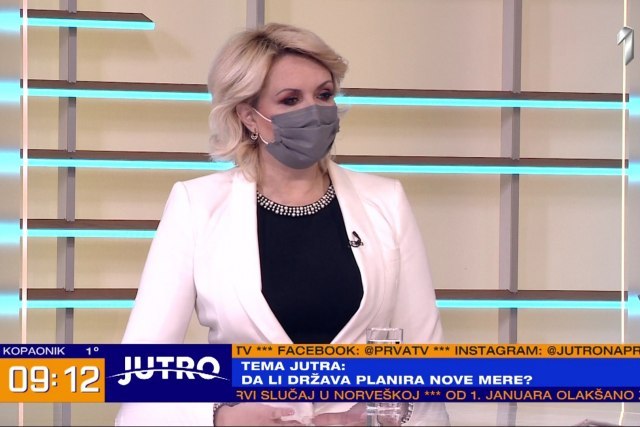 As she stated, we all have to wear masks at all times and act as if we are infected.

"If we look at the ratio of hospitalized and discharged, we have a plus of 300 in recent days, which means we need 300 new beds every day. That number is something really alarming," Crisis Staff member and Minister of Labor, Employment, Veteran and Social Affairs, said.

She stated that every day a great effort is made to organize the health system.

"The fact is that we are testing a much larger number of people," she added.

As she said, if everyone wore masks and kept their distance, we would not even need other measures.

She spoke especially for TV Prva about social protection institutions and gerontological centers.

"Our citizens are a priority for us, but if we compare the results with other countries, we see that these percentages are lower than in other countries, but that is no benchmark for us," said the minister and member of the Crisis Staff.

She once again emphasized why the measures were more rigorous at the beginning of the epidemic, when the degree of the disease was lower.

"It was an idea to protect those who were most endangered. The oldest, as the most responsible part of the nation, accepted all the recommendations," Dr Kisić Tepavčević said, adding that even now the highest percentage of patients is in the group under 60.

The Minister stated that it is important to point out that measures are strictly implemented in all social protection institutions.