Today, the Assembly of Serbia adopted amendments to the Law on Preventing Contagious Diseases 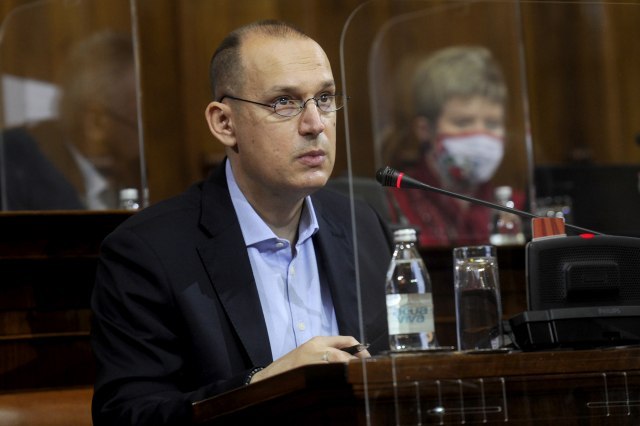 takes effect with the publication of the law on the budget in the Official Gazette.

The Law on Preventing Contagious Diseases takes effect with the publication of the law in the Official Gazette, and according to the decision of the MPs, the law can enter into force within 8 days of its publication.

It should be reminded that earlier in the day, Ivica Dačić said that no amendments had been received to the amendments to the Law on Preventing Contagious Diseases.

The new law envisages the introduction of personal protection measures and increased responsibility of citizens in the fight against coronavirus.

The revised Law on Preventing Contagious Diseases allows the communal police and inspectors to sanction a person not wearing a face mask or disrespecting physical distance in the open or indoors with 5.000 dinars fine.

A fine of 300.000 dinars will be imposed on a legal entity if it fails to take actions and activities for the implementation of personal protection against infection, as well as if it fails to designate a person responsible for the direct application of these measures with a fine of 50.000 dinars.

The proposed changes and additions also include the coronavirus, and the category of contact was introduced as persons who are obliged to adhere to the measures and instructions determined by the doctor.

Self-isolation is also defined as a measure for people requiring treatment at home. It restricts the freedom of movement of patients with infectious diseases without symptoms and patients who don’t require treatment in hospital.

The amendments to the law also regulate that the certificate from the epidemiologist be sufficient proof to the employer that the worker does not work for a certain period of time, and that he is entitled to a salary.

Amendments to the law authorize the minister to prescribe mandatory or recommended immunization for certain persons, and in order to prevent the introduction of the virus into the country, the minister may order protection measures and laboratory testing upon entering the country.

The Government of Serbia will be able to restrict the entry into Serbia of persons coming from countries with unfavorable epidemiological situation, decide on the opening of quarantine facilities, treatment abroad if the capacities in the country are filled, and form a Crisis Staff, if necessary.

The Communal Police also controls the implementation of the measures

Supervision over the implementation of measures, in addition to the Sanitary Inspection, is performed by the local self-government through the Communal Police.

The sanitary inspector, in addition to the authority he had so far, can also issue a misdemeanor order, while the Communal Police can order the emptying of the area where the protective measures were violated, as well as to close the facility for up to 72 hours.

According to the Minister, the amendments to the law form the legal framework for measures and procedures, in which in the coming period the epidemic will be better kept under control, which will in turn prevent greater negative consequences.