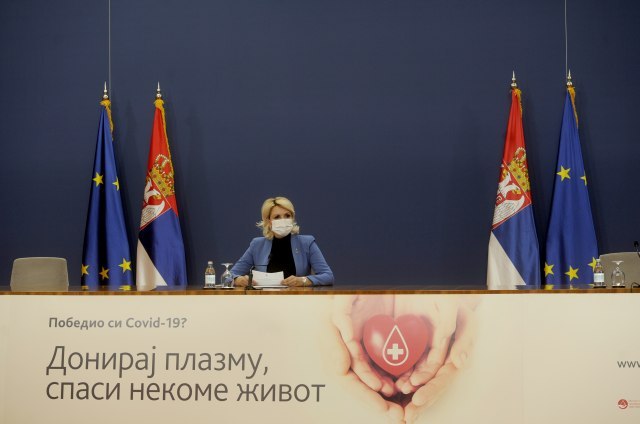 Epidemiologist Darija Kisić Tepavčević said at the press conference that it was decided at today's session.

"When it comes to the forthcoming holidays, it lasts for elementary and high school students on November 11, 12 and 13," she said, adding that it would be a "mini-vacation."

She explained that the measure of gathering refers to an organized gathering, and that it is possible to find more than five people in a room if there is four square meters for each of them, in order to maintain a physical distance.

"It does not refer to the school environment, to the work environment, in such environments it is obligatory to provide four square meters per person in the room. Which means that the distance between people is two meters," she said.

That measure, as she says, refers to all types of celebrations, congresses, seminars and the like, that is, to all organized gatherings.

As she said, up to 500 people in the space are still valid for theaters and cinemas, but recommendations were made under which conditions.

"To enter the hall where the show and projection are, it is a procedure that requires patience," Dr Kisić Tepavčević says.

"How successful the measures will be depends exclusively on us," she noted.

Dr Kisic Tepavcevic said that the increase in the number of cases of COVID-19 was not unexpected.

"Every life is very important, we have lost 10 fellow citizens today and it cannot comfort us that the situation is more difficult in other countries," she said.

Kisic Tepavcevic said that we have eight months of experience fighting coronavirus.

"All countries in the world have the same preventive measures that they apply with a larger or smaller legal framework, and we have not yet decided on some of the most radical measures in terms of restricting movement and working hours," she said.

She added that the situation is extremely unfavorable and unstable.

The Ministry of Education confirmed

According to the decision of the Crisis Staff, all primary and secondary school students in Serbia will have an autumn vacation from November 11 to 13, while the first working day is Monday, November 16, the Ministry of Education announced.

As it is stated, the Crisis Staff made such a decision at today's session due to the current epidemiological situation.

It is also pointed out that one of the priorities of the Ministry of Education, Science and Technological Development in the conditions of the epidemic of the COVID-19 virus is the safety and protection of the health of pupils, students and employees in educational institutions.

Those restrictions are valid on the territory of Vojvodina

Students of primary and secondary schools on the territory of Vojvodina will not attend classes on November 12 and 13, the Provincial Government announced today.

In accordance with the measures adopted by the Crisis Staff for the suppression of the coronavirus, and due to the current unfavorable epidemiological situation, the Deputy Prime Minister and Provincial Secretary for Education, Regulations, Administration and National Minorities - National Community Zolt Sakalash made a decision to suspend classes in primary and secondary schools, so the classes will not be realized on the territory of AP Vojvodina on November 12 and 13, it is stated in the announcement.

The schools will be subsequently informed about the manner of compensating for the missed educational work, it is stated in the announcement.

According to the decision of the Crisis Staff, all primary and secondary school students in Serbia will have an autumn vacation from November 11 to 13, while the first working day is Monday, November 16, the Ministry of Education previously announced.