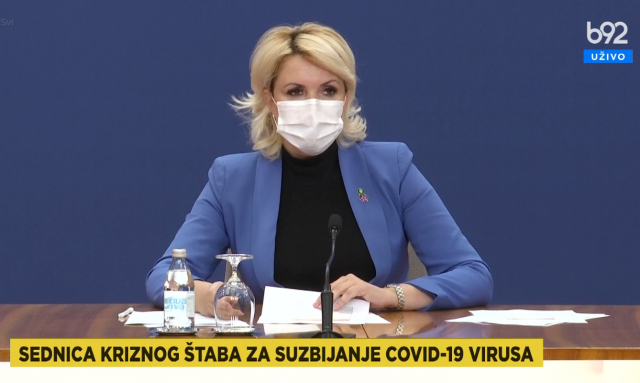 "We see that every day there is a growing number of people who require hospitalization compared to those who have completed treatment. Every day we are increasingly filling the capacities in the range from 150 to even over 200 beds," she said.

As he says, there have been more than 1.000 newly infected people in Belgrade in recent days.

"14 percent of them are from New Belgrade, 13 percent from Zemun, Zvezdara and Rakovica, about 11 percent, and other municipalities are less represented," says Kisić.

According to the analysis of the first eight months of the epidemic, it is concluded that more men are infected than women.

"Eight months have passed since the first detection of the virus in our population, and if we analyze the distribution in relation to gender, we see that 53.3 people are male and 46.7 are female," she said.

Based on the same analysis, it was determined that 60% of those infected were aged 30-59.

She also spoke about the epidemiological situation in schools.

"During the previous week, coronavirus was registered in schools in 248 children, 151 in students in primary schools and 97 in secondary schools. In the first four days of this week, the virus was confirmed in 202 people, 74 from primary and 128 from secondary school. the virus was confirmed in 708 students, 400 from secondary and 308 from primary", says Kisić and adds that the situation is stable in the school environment, as well as that there are districts in Serbia where no case of infection has been recorded in schools.

"We see that the trend of transmission of coronavirus infection around the world has increased. Most countries are registering record numbers. We have not yet decided on some of the most radical measures or limiting working hours. The situation is extremely unfavorable. We must not and we should not relax. We decided to reduce the number of people who can gather indoors to five. Also, as far as the autumn break is concerned, we have decided that children attending primary and secondary school have a mini break from November 11 to 13," she said.

The journalists were interested in what the measure banning the gathering of more than five people indoors brings with it, whether it means closing the cinema, how it will affect the work of schools and public transport, etc.

"As the previous measure was regulated, so will this one. It is not at the level of a recommendation. You know that all countries have adopted such a measure with different numbers of people. This primarily refers to organized gatherings, it does not refer to the work and school environment. "When it comes to cultural events, up to 500 people have been allowed at the moment. It is precisely prescribed how to behave. Buses are also not a place of organized gathering, but they are certainly a place of virus transmission," Kisic said.

As he says, we should be careful as if we are carriers of the virus or were in contact with the carrier.

"Research of contacts is done, but their testing is not done in most cases. We should always keep in mind that in addition to laboratory confirmed cases, we have five to 10 who have no symptoms. Surely some of us in this room carry the virus without knowing it, "Kisic said.

She spoke about the amount of fines for those who violate the measures.

"The law on protection of residents from infectious diseases now has undergone some changes, but the most important thing when it comes to prevention of COVID-19 is the issuance of a misdemeanor order, which the inspector will be able to issue on the spot. The fine is 5.000 dinars for citizens, and for legal entities from 30.000 to 300.000 dinars", Dr Kisić Tepavčević said.

We are facing the season of family feasts celebrating saint's day.

"If we love our family and friends, the least we can do for them is to reduce the risk of infection. The only advice I give everyone is to limit the gathering to the maximum," she concluded.