Crisis Staff session scheduled for tomorrow; "The next three days are crucial" VIDEO

Epidemiologist Branislav Tiodorović said that the Crisis Staff will meet tomorrow at which new measures will be adopted, but we will not face total lockdown. 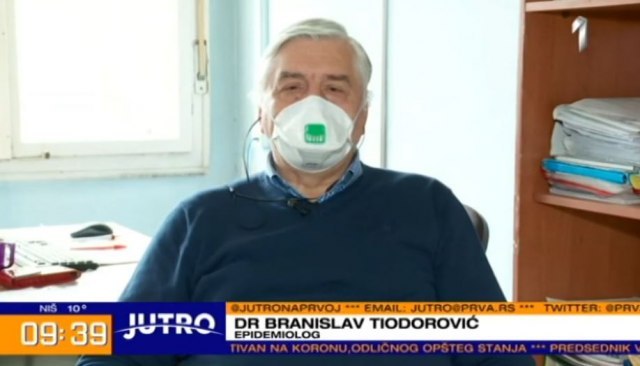 He told Prva TV that it was warned that November and December would be difficult, and that those who were supposed to implement and monitor the implementation of the measures did not do their part of the job.

"I don't think we will be able to go with a lockdown at the moment, as is the case in some countries, because we are in a better situation," he said.

"We drew attention to the nightclubs two months ago. Not much has been done there although we submitted the third amendment to this law on misdemeanors," he noted. As he stated, for now, there is no reason or justification for curfew and state of emergency. "In that way, we would only lead to greater tensions and an irresponsible response from the part of the population that is behaving irresponsibly already," said Tiodorović.

Speaking about the situation in the south of Serbia, he said that 50 percent more first examinations were recorded in COVID dispensaries and the influx of patients to hospitals.

"It is especially bad in Presevo and Bujanovac, the Vranje hospital will be under great pressure from the patients who stayed, and I drew attention to that, towards Northern Macedonia. I have previously appealed to reduce shopping trips and smuggling that flourishes in the south," he said

He added that it is especially important that we be especially careful in the next three days, that no gatherings or celebrations are organized.

"The peak can be expected in mid-November, as we announced in September, and then if everything is under control, we will have a more controlled situation, and after mid-November we will start flattening the curve," he announced.

"Schools and kindergartens will have to function, but we will have to estimate that the autumn break for schools has been extended, and it start next week," Tiodorović announced.

The crisis headquarters will meet tomorrow at noon.﻿