Vučić: There will be elections, I do not exclude parliamentary elections either VIDEO

During his visit to the Clinical Center of Serbia, President Vučić said that there would be "some new virus", but that the Serbian health care system is ready. 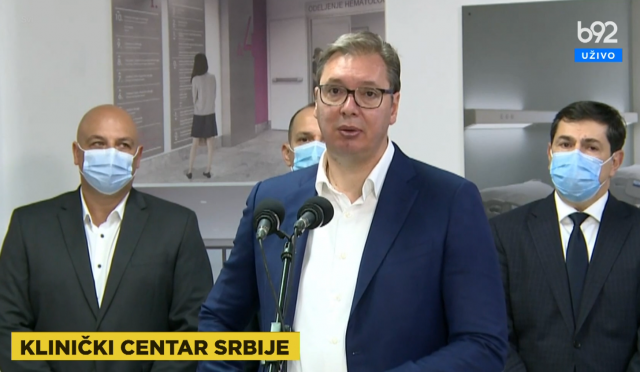 "Now we are terribly happy that we thought about it in time, and at a time when the pandemic was not so strong in Serbia. There will be a new coronavirus, and the strengthening of health care capacity strengthens the overall power of the state," he says.

As he states, COVID infection is growing - the numbers are increasing both in Europe and in Serbia. "We will have new infections, there will be new viruses, but we will have huge capacities," he added.

Yesterday, a part of the opposition met with the European Commissioner Varhelyi, and Vučić stated that it was not important for him to comment on that, because we have a lot of work ahead of us.

Starting with combating coronavirus, which is becoming increasingly difficult...", he states. As he further states, he admires the doctors and is grateful to them for doing the hardest job. "They deserved our recognition, because they saved lives of Serbia," says the president.

He adds that Serbia continues on its European path, but will also keep its defense, while commenting on the visit of the Commissioner, he added: "And to be honest, no matter who I resented in Europe and the world, I am proud of every word I said last night, because I know that it is difficult as a president to say something so as not to offend anyone, but also enough courage to say what everyone sees and thinks".

When it comes to the situation with COVID-19, he states that he is very worried, and that it has been noticed that the virus is flourishing.

"As for the restrictive measures - I was not very afraid of the protesters that threw rocks on the Parliament building. If we have to, we will apply more severe measures, and what kind - it is up to the Crisis Staff," he says.

At the moment, there are no announcements for such measures, he adds.

Serbia's policy is to be on good terms with everyone, he says of the European Commission's report. As he further states, he is proud of establishing good relations with China and Russia, but also with the EU.

He also says that he would not rule out the parliamentary elections, but the elections for the city of Belgrade will be held in a year and a half.

"The bottom line is that I'm willing to pay any kind of political price."

When it comes to participating in the campaign for the parliamentary elections, he states that there are more events today than during the campaign, and he adds that Macron and Johnson participated in the elections in their countries from the position of prime minister.

He also says that he will end his term proudly because of everything that has been done. He adds that he does not think that the independence of the judiciary is a problem, but efficiency.

"There will be no new Storms"

There will be no new storms or pogroms of the Serb population from Kosovo and Metohija, Serbian President Aleksandar Vucic said today, regarding allegations that Serbian services indicated that organized provocations and attacks by Albanians on Serbs in Kosovo and Metohija were being prepared, in order to create instability.

"As I have already said, there will be no new Storms, no pogroms of the population, and we are standing by that. And we will fight diplomatically, we will inform, warn...", Vučić said.

The President said that he personally wants to believe in reason and that Albanians also understand that nothing can be solved with weapons, but that only through talks, cool heads and compromises can we achieve a better life for both Serbs and Albanians.

The media reported today that the Serbian services warned the top of the state that Serbs in Kosovo and Metohija, especially those in the enclaves, will be the target of organized provocations and attacks by Albanians in the coming days, all with the aim of creating instability that would lead to obstructing Belgrade-Pristina dialogue, as well as co-operation with the Special Court in The Hague.