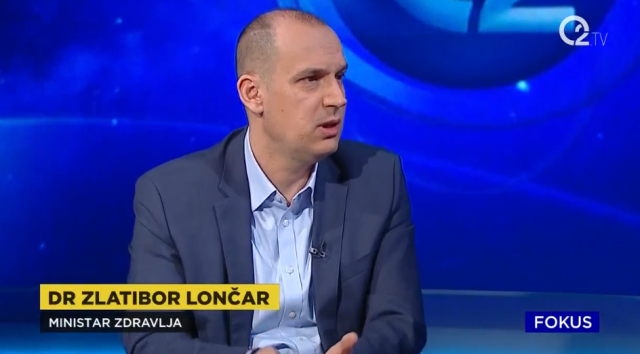 RTS reports that the meeting lasted more than an hour and a half, and the representatives of the association "United Against COVID" assessed it as constructive.

"The first item is the pressure on colleagues because of whom we organized all this. The agreement is for our members, signatories of the petition, to state their names and come to talk to them to redefine the situation and see if any of our members and who has been replaced and as for Dr Lejla Ćeranić, she has the position of the head of the department. If she wants to be the head, she cannot be replaced", the representative of the Association, Vuk Vučić said.

According to him, they insisted that the institutions be included in the work of the Crisis Staff.

"The minister promised us that he would personally invite those people that we propose," Vuk Vučić stated.

"Doctors cooperating with each other - finding a common language"

Minister of Health, Zlatibor Lončar, pointed out that when doctors talk to doctors, a common language can be found.

"What we agreed to do is to work together. Serbia has those results that are among the best in Europe and the region. We have to do a lot together to keep those results. There were questions that were asked about people who are thought to be replaced from some places because they signed something", Lončar stated.

He points out that what this state stands for is that there will be no revanchism at any moment.

"It is necessary to get adequate data. We agreed to bring the data for all those who think they were replaced because they signed a petition and to do an analysis and see if it is true or not," Loncar said.

He adds that everyone has a common goal to determine the truth and circumstances, because medicine, he says, is such a living organism where changes must take place.

When it comes to hiring young doctors who were employed during the state of emergency, Lončar notes that it is knocking at the open door.

"We need such young doctors. There was a misunderstanding whether these young doctors can get the specialization they want, which sometimes is not possible for everyone to get what they want. But we have committed ourselves to examine that and help as much as possible", Loncar said.

The opinion of the Association, he points out, is that some people could join the Crisis Staff.

"Give concrete proposals, I will personally call on those institutions, whether the proposals are to tighten measures or reduce them, because we will also know how to analyze them better. This is a joint struggle that we have not finished, we can have a much worse situation in a couple of weeks. Let's relax and I hope that cooperation can be made. We agreed to meet once a month and to function on the principle of facts and to solve them that way," Loncar pointed out.

He adds that the overall situation in Novi Pazar and the Zvezdara Clinical Center has been analyzed.

"Directors are my responsibility and choice, I took it upon myself to take additional interrogation measures, we will come out with all the facts. The situation in Novi Pazar is especially complex. The most important thing for the citizens is that the citizens in Novi Pazar and KBC Zvezdara will get the best possible service."

"United Against COVID" Association will not hold a protest on September 26 due to a constructive conversation and the overall epidemiological situation in the country.