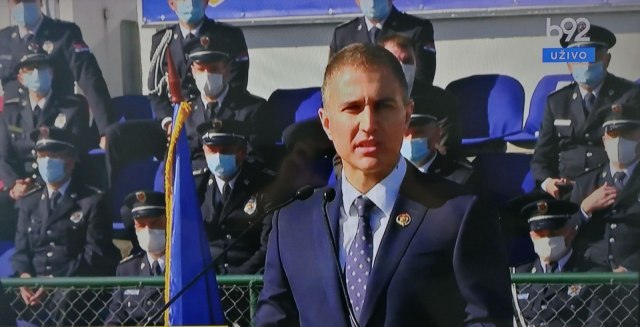 You can follow the ceremony live on our portal.

Apart from the President of Serbia, the ceremony is also attended by the Prime Minister Ana Brnabić, the Minister of the Interior Nebojsa Stefanović, as well as the Ministers of the Government of Serbia.

After the national anthem, the Minister of the Interior addressed the audience, saying that trust in the police had returned and that the number of requests for admission to the police was increasing year by year.

Police Director Vladimir Rebić then handed over the decisions on rewarding the trainees.

The participants of the 23rd and 24th classes of the Center for Basic Police Training will join the ranks of the Ministry of Internal Affairs today, after the completion of the nine-month training, the Ministry of the Interior announced.

As it was announced yesterday, the promotion of future police officers will be honored by the presence of their senior colleagues from special police units - the Police Brigade, the Gendarmerie, Intervention Unit 92 and the Police Helicopter Unit.

They will perform several demonstration exercises.