Loncar: If you are competent... VIDEO

Prime Minister Brnabic did not start today's conference on coronavirus as usual, with a report on the epidemic. The death of Ljubisa Djuric was the main topic. 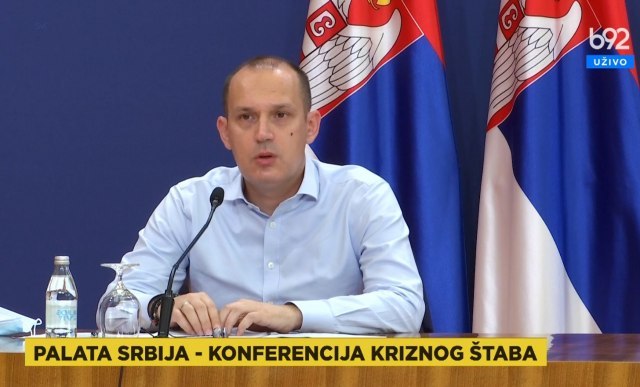 The AFP stated that the report from the Zemun hospital shows that Ljubisa Djuric was waiting to be transferred to the hospital's respiratory center, where no respirators were available at the time, Nedeljnik reported.

Ljubisa Djuric died at the Zemun Hospital on April 12, and his son, Petar Djuric, who took part in the demonstrations in Belgrade and became known to the public for his statement "I'm sorry, this is for you, Dad", told N1 that his father died because at that point, there was no respirator in the hospital.

"I will respond to the monstrous accusations and lies, placed again, now through a foreign news agency that one person in the Republic of Serbia died in KBC Zemun because there were not enough respirators. I want to tell the citizens quite clearly that during the whole fight against coronavirus in our country "There is no person in the country who did not receive the support of a respirator, invasive or non-invasive, if needed, when it was needed. There is no one in Serbia who died waiting for a respirator. Serbia had enough respirators at all times, more than enough, actually", Brnabic said.

It was important to us that our health workers do not get into a situation where they had to choose between the lives of two people.

"What is being placed today through foreign media agencies is a terrible, outright lie. I and all of us together will not allow anyone to divide people in Serbia, to lie about Serbia, to humiliate Serbia only for some political reasons."

At the time when Ljubisa Djuric was treated in the Zemun hospital, that hospital had 35 free respirators and the man was on a non-invasive respirator, she stated.

We have never been even close to filling all the capacities of respirators and we have been successful in that, the Prime Minister noted.

"It is not clear to me why it is coming from a media agency, which comes from a country that has, unfortunately, had terrible consequences, more than 30.000 patients, with 60 percent higher mortality rate than usual for that country."

We had a drop in mortality.

When asked on what basis they claim that the AFP report deceived the public about Djuric's son's paper on his father's treatment, which states that "currently there are no vacancies, treatment in the intensive care unit continues", Minister of Health Zlatibor Loncar told the journalist that he is not certain whether he has any idea of what it means when someone is on an invasive respirator, a non-invasive respirator... Then maybe they could discuss things further.

"At no point, what the prime minister said, was there a situation with no respirator, so he could not have died because he did not have a respirator. The man was on a non-invasive respirator. We have a saturation of 96 and he was on a respirator for four days. If you think that you are competent to decide when someone will be intubated... ", Loncar said.

Why wouldn't someone be on a respirator when you have 34 respirators available at that moment, Loncar asked.

"You asked where we got the data from, an internal and external report was made in this case. Along with another report, from the supervision."

Is it true that in the history of the disease of this patient, it is written "there are no vacancies", Loncar answered that the media do not understand the documents and that they should finish medicine in order to understand.

"In order for the citizens to understand, he was at a safer level to monitor his overall condition."

Dr Dragos Stojanovic, the director of the hospital, said that KBC Zemun had 35 respirators of its own on March 15, and Serbia provided another 38, so they have 73 respirators in total.

The director of KBC Zemun, Dragos Stojanovic, said that he had two requests for journalists.

"The first request on behalf of the medical and non-medical staff is that you, who we truly believe are realistic reporters of the situation, appeal to people to adhere to the measures as much as possible. The second, anyone who doubts, should come to the Zemun hospital to see for themselves in the state of things in the hospital and see if the doctors are working properly", Stojanovic said.

Prime Minister added that Serbia is fighting the epidemic and the entire crisis that has gripped the whole world. She said that they understand that the people who signed the petition are frustrated, because it is difficult everywhere, but that the health systems are on the verge everywhere in the world.