"We transferred patients from certain cities to Belgrade, to prevent problems" VIDEO

Minister of Health Zlatibor Loncar said at the conference on coronavirus in Serbia that record number of people got tested so far today - 11.521 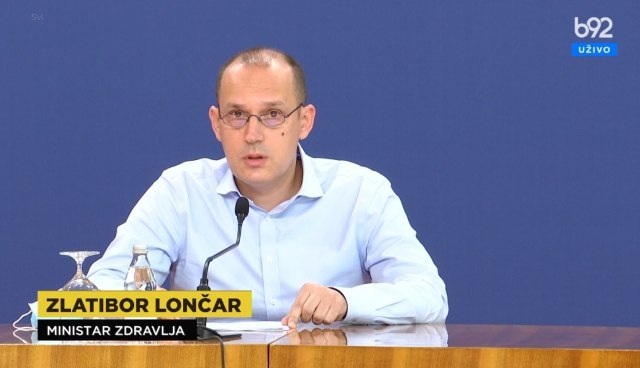 He said that there are no major problems when it comes to the capacities of hospitals, but that assistance was provided to hospitals in three cities in order to avoid further complications.

"We held meetings with the directors of COVID hospitals, since it is the biggest hot spot in Belgrade, we will not have problems with accommodation capacities today and for the next 48 hours. However, we faced with problems in Cacak, Kraljevo and Pozarevac. They have a certain number of places available for newly infected, but the number of examinations is not reduced", Loncar said.

"We are preparing for the worst case scenario, we have transferred patients from those hospitals to Belgrade so that they can calmly wait for the night and tomorrow, so that they do not get into trouble. No emergency situation, we are just a few steps ahead of the situation that could happen to us," he explained.

Loncar said that he was satisfied with today's statistical data, especially because of the reduced number of deaths.

"We discussed methods of monitoring contacts with COVID-positive people. Contact is considered to be a stay longer than 15 minutes with an infected person without wearing a mask," Dr Verica Jovanovic, director of the "Batut" Institute said.

Dr Goran Stevanovic said that these contacts also depend on the clinical picture of the infected person and it is difficult to assess who is more infectious and emphasized that we should all act as if everyone is potentially infected and respect all prescribed measures.

When it comes to going to schools and faculties, Dr Verica Jovanovic said that they are working on plans for the work of those institutions in the fall.

"We are constantly working on plans that are of great importance and that concern preventive measures for the period ahead of us, including schools, faculties, i.e. wherever certain groups will gather. The virus will be with us, we are working to reduce the number of infected. "The number of infected people is decreasing day by day. When we come to numbers that are very small, close to single digits, then we will apply the measures we are considering now," Jovanovic said.

Minister Loncar answered the question about the petition for the change of the Crisis Staff, signed by some doctors.

"The Crisis Staff needs epidemiologists and we have no better than those currently in it. It was offered to some, who stood out in the comments, to join us, they didn't want to. All measures are taken by epidemiologists, not surgeons, and that is why they are the crisis staff members and they are taking measures, and we are implementing them", Loncar said.

He urged the citizens of Serbia to be united in combating COVID-19 infection, and respect all the measures, in order to make it as easy as possible for doctors and other health workers, and that now is not the time for politics.

"The problem in the Fire Eye Laboratory was the following: In order for the laboratory to work at full capacity, you must have seven components. Two or three days ago, one of the components was missing, and those were not reagents," Minister Loncar explained.

"Our task is to preserve health and life of all people," he added.

"You don't have to go to three places a day to get tested. The test doesn't cure, it just helps us. It's important how you feel, what your clinical picture looks like, how's your blood test, saturation... It's important that they know what therapy to give and save your life", the minister said.

"More than a dozen, over 30 of them have been sanctioned for not wearing masks indoors," Minister of Health said.

"Our goal is not to punish someone, but to raise people's awareness. I am convinced that our people are increasingly realizing that the virus is there," he added.

When it comes to pregnant women in Nis, the Minister said that one pregnant woman is in a better condition, and the other one faced some complications.

Dr Stevanovic said that the media should not speculate about drugs because that is the job of the doctors in charge for people's health.