Crisis Staff on autopsies, mosquitoes, the most common symptom of coronavirus...VIDEO

At the press conference, Minister of Health, Zlatibor Loncar, pointed out that no autopsies of COVID-positive patients had been performed. 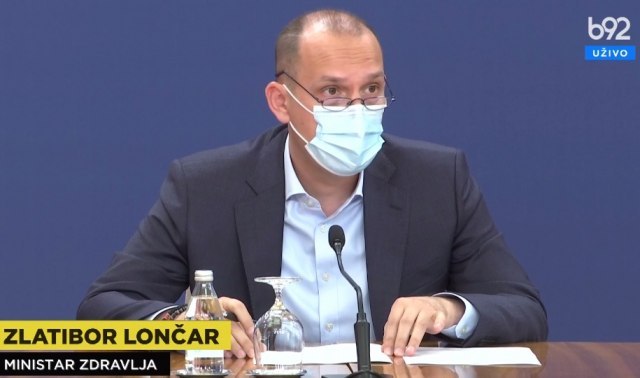 Minister of Health Zlatbor Loncar said that we have the biggest problem in Belgrade and Novi Sad and that in the next few days we will have an increase in those infected due to the protests.

Announcing the latest data on newly infected, he said that 649 health workers were positive for COVID-19.

Regarding the autopsies of COVID positive patients, he pointed out that he responsibly claims that the WHO recommended that they not be performed. If they had been performed, they would have been in forensic medicine, he said, adding that he had documents with claims from the competent institutes that they had not been done.

If someone said that someone died from coronavirus, he would receive the Nobel Prize tomorrow, he said.

"For all of us, the only acceptable and desired effect is that we do not register this disease in our population," Kisic Tepavcevic said.

Regarding those infected at the protest, he says that according to doctors' information, the doctors asked the patients whether they were at the protest, Minister Loncar explained.

He announced the announcement of the number of healed at the press conferences. There are several visits per day and that number changes from hour to hour, which is why it has not been published so far, Loncar said.

Where is Dr Kon?

When asked why Dr Predrag Kon does not appear at conferences, he said that Kon is well and that there is no special reason.

"He's fine. He's healthy. Whether he'll be here tomorrow or the day after tomorrow - depends on him, because he has a lot of responsibilities. When he can, he'll always come..."

"We will not enter into long-term forecasts and they depend on our behavior. As you can see, no one could have predicted exactly. I have confidence in the citizens of Serbia they will understand the situation. Not only to change themselves, but to try to change others. Only when we hit the wall, we start wondering", Loncar said.

Regarding the latest research, which says that headaches are more common symptom of coronavirus than fever, Dr Goran Stevanovic pointed out that there are no specific symptoms about the coronavirus and that doctors are still learning about the new virus.

"Temperature is still the most common symptom," Stevanovic said.

"No one should be diagnosed based on the results of a serological test, the gold standard for this virus is the PCR test. The tests we report are PCR tests," Dr Darija Kisic Tepavcevic said, adding that everywhere in the world, there is a person with the symptoms of the disease, and receive a negative test because the test is not perfect.

"Our priority are the people with symptoms, who are assessed by the profession, not those who would like to be tested every day," Loncar replied to the journalists' comment that some do not get their turn to get tested.

"I responsibly claim that no one in Serbia, because one was waiting for the test, had any problems, that there was a standstill, so that something happened," Loncar pointed out.

About the crowds and queues for testing, as in front of Torlak, Loncar said that most of these people are the ones who do not to be tested.

"Even now, there is an appointment, but many people are waiting, hoping that they'll take test earlier than arranged...", Kisic Tepavcevic said, reminding that those are primarily passengers.

It has not yet been proven that mosquitoes can transmit coronavirus.

"This coronavirus is also animal in nature. A mosquito as a vector is a carrier of a large number of infectious diseases. At this moment, it has not been proven that a mosquito can be a vector for a coronavirus," Stevanovic said.

Minister Loncar said that the Djokic brothers, who died of coronavirus in the hospital in Cacak, and the family's complaints, are already being processed.

"Our inspection, an independent inspection of the Ministry of Health has already joined the investigation in these cases."

Loncar was not informed about the writing of the local media in Kragujevac, which carried the news about the problem with the donation of X-rays device from the ministry, according to him.

"This is the first time I hear about it, it will be resolved as soon as possible if possible."

Work from home should be supported where possible, Dr Darija Kisic Tepavcevic said.

"Working from home as a preventive measure really makes sense, but it also depends on the very nature of the job. It is something that should be supported," Kisic Tepavcevic concluded.