Torches and whistles, followed by fireworks: No incidents at the protest VIDEO/PHOTO

In front of the Assembly of Serbia and in the Pioneer Park, a peaceful gathering of citizens began, who were invited to protest today through social networks. 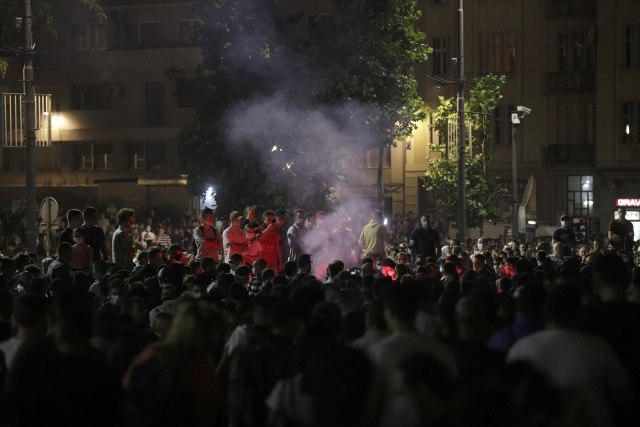 Citizens were informed about today's protest via social networks that they will participate in a "sit-in protest" in order to distinguish themselves from those who came to provoke violence.

22:57 The journalist of the "Nova" portal was attacked by hooligans with hoods, while he was reporting on their obstruction of a peaceful protest, according to this portal. As it is further stated, the journalist Vojislav Milovancević was attacked by guys in black T-shirts, with hoods, in the park between Vlajkovic Street and the National Assembly building, while he was doing his job. According to the first information, he was most likely hit in the head with a boxer or some sharp object.

22:42 Part of the demonstrators danced. The number of people in front of the Assembly is slowly decreasing, and people are cleaning up the garbage behind them. It's calm.

22:20 There are fireworks in front of the Assembly.

22:11 The media report that masked guys clashed with the protesters. Twitter users state that they are Rad fans, but the information has not been confirmed. Tension occurs every two minutes. However, there are still no major riots at the Main Post Office.

22:07 Protesters fought with each other, One part of the demonstrators marched towards the Pioneer Park accompanied by whistles. The situation threatened to become more serious, but the police still did not react. A torch flew towards the Assembly, and another one was set on fire in Pionirski Park. A young man took a lighted torch to the Presidency and it was extinguished.

A young man was hit in the head with a plastic bottle, and a group of demonstrators sitting on a plateau called on people to return and sit down.

21.30 Two cannon shots were heard. The torch also flew towards the Assembly, but it quickly went out, as did the glass bottle, TV Prva reporters report. Protesters were against it and protested against such behavior of other demonstrators.

21:29 The reporter of TV Prva informs that "the situation is on the edge", and more and more citizens are coming from the direction of King Alexander Boulevard. Being hosted at PRVA Tema show, the Prime Minister, commented on such situation, saying that she was worried.

21:18 Protesters no longer sit, everyone gets up, and they periodically shout slogans.

20:53 Apart from the fact that the protesters are louder than before, the situation on the plateau is calm. ﻿

20:40 Sergej Trifunovic: Sitting in front of the Assembly in order to make a difference between right-wing groups and a pure civic gathering.

20:35 The space in front of the Assembly is almost completely filled. Slogans are heard: "Sit down", and most of the demonstrators are currently wearing masks. Dragan Djilas, the President of the Party of Freedom and Justice, is also present at these demonstrations.

20:24 In front of the Assembly of Serbia, citizens are still protesting peacefully while sitting, with the motto: "Don't sit down, sit down". Thus, those who are already sitting in front of the Assembly are shouting "sit, sit" and "sit down" to those who are coming, although there are enough of those who are standing, talking, walking, Tanjug reports. Members of the Gendarmerie were stationed at the entrance to the Assembly from Kosovska Street, under full equipment for breaking up demonstrations, as well as a cavalry police unit. Traffic is closed in all streets that flow into Nikola Pasic Square, as well as in front of the assembly. A metal protective fence has been set up around the assembly, and there are no police on that side.

20:05 As reported by the reporter of TV Prva, the leader of "Enough is Enough", Sasa Radulovic, also appeared at the protest.

19:52 Protesters clashed with each other over whether to sit or not.

19:45 The media report that Sergej Trifunovic also arrived at the protests. The media state that he came accompanied by security. A TV Prva reporter reports that Srdjan Nogo is also there. As Tanjug reports, on the plateau in front of the Assembly, Srdjan Nogo and his supporters turned a deaf ear to the invitations of other protesters to sit down.

19:31 TV Prva reporter says that tensions are rising in front of the Assembly. She further states - the situation changes from calm to tense. According to her, the President of the Democratic Party, Zoran Lutovac, is also present, sitting together with the protesters.

19:03 Reporter of TV Prva, who reports from Nikola Pasic Square, reports that the leader of Dveri, Bosko Obradovic, has also arrived.

18:29 As reported by Prva TV, there are currently about a hundred citizens at those locations, while strong police forces are deployed around the National Assembly building, as well as in front of the presidency.