After protesting in front of the National Assembly, chaos moved to the central streets of Belgrade. Police threw teargas, situation calmed down around midnight. 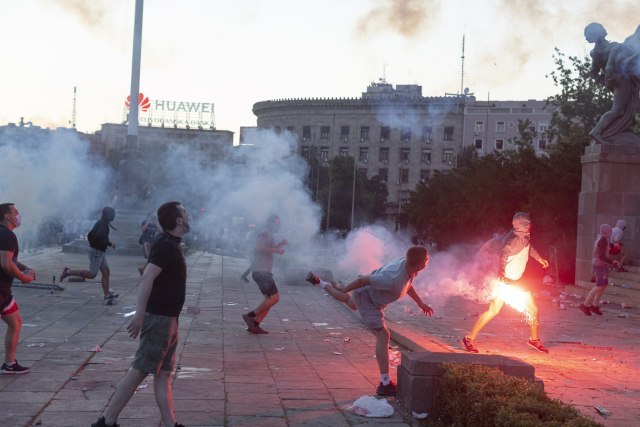 ﻿After the attack on the police, law enforcement forces occupied the entire plateau in front of the Serbian Parliament, and the citizens were dispersed. The riots then moved to other central streets of Belgrade.

23:55 There are fewer people on the streets, and the number is gradually reducing, so the riots in the center of Belgrade are over.

23:45 A group of protesters blocked Resavska Street, where containers were set on fire. The police headed in that direction.

23:40 Vehicles of Gradska cistoca arrived in the center of the city, and that part of the city is being cleaned after tonight's demonstrations. The gendarmerie continues to provide the district around the Presidency of Serbia.

23:25 Protesters dispersed from King Alexander Boulevard near Resavska and other surrounding streets. There are no more gendarmerie cordons.

22:59 After the incident, but also the quarrel among the protesters, they withdrew because of tear gas.

22:48 In King Alexander Boulevard, protesters approached the police, throwing stones and tear gas towards the cordon, and also broke traffic signs. The gendarmerie responded with tear gas, which they threw from armored vehicles at the protesters.

A large amount of tear gas was thrown, so the members of the Gendarmerie had to withdraw without the necessary masks. ﻿

22:34 Ambulances can also be seen on the streets. The protesters marched towards the National Assembly again, but withdrew after the tear gas, B92 reporter informs. Protesters threw stones and tear gas at security forces.

22:25 Chaos is currently in King Alexander Boulevard, where a lot of pyrotechnics were thrown, and then tear gas. The demonstrators fled in the direction of the Church of St. Mark and Tasmajdan Park.

22:14 A large number of people are in King Alexander Boulevard, where there was a conflict between the demonstrators.

22:08 Protesters threw torches at the police and tear gas was thrown at the National Theater due to the riots. The gendarmerie is strengthening the cordons in Takovska Street near the National Assembly.

21:50 A tear gas canister was thrown near TC Staklenac on the way to the Youth Center, reports the B92 reporter.

21:45 Until this moment, it was calm in the center of the city, traffic was released from the Terazije tunnel. However, there are currently incidents near the Youth Center, protesters throwing stones at the police. A tear gas canister was thrown near TC Staklenac on the way to the Youth Center, reports B92 reporter.

21:32 Due to the stones being thrown, the gendarmerie withdrew to the vehicles of the Serbian Parliament.

21:19 The police fired tear gas at Terazije, reporter of the B92 portal reports.

21:07 The crowd formed near the Terazije tunnel, where public transport buses full of passengers are parked.

21:00 Armored vehicles and gendarmerie are moving towards the building of the Presidency of Serbia. The gendarmerie peacefully passed the protesters in Kralja Milana Street and received applause for that.

20:55 A large number of members of the police and gendarmerie are also located near London.

20:50 The largest number of demonstrators is currently at the intersection of Resavska and King Alexander Boulevard. Cavalry is also present.

20:40 The police cordon is also located on the corner of King Alexander Boulevard and Kneza Milosa Street, because a large number of those present went to the Church of St. Mark after the tear gas.

20:31 Protesters caused riots, broke through the fence around the assembly and tried to enter the hall of the parliament, but the police drove them away with tear gas.

According to the media, among those gathered are opposition leaders Vuk Jeremic, Janko Veselinovic, Dragan Djilas, Bosko Obradovic, independent MP Srdjan Nogo, as well as the president of the Democratic Party, Zoran Lutovac.

Earlier, there was an incident when Sergej Trifunovic was attacked, who suffered head injuries.

After that, the media stated that Dragan Djilas was also attacked, but he denied it. ﻿