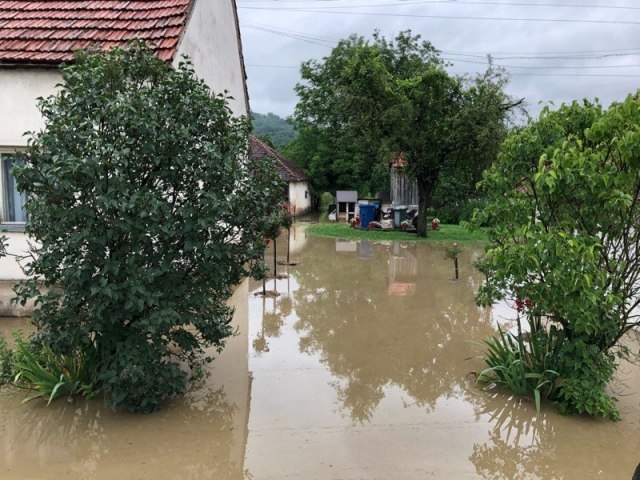 Due to the overflow of the rivers, floods occurred in several places, and eight municipalities declared a state of emergency.

The floods caused great damage to the area of the municipality of Ivanjica.

Overflowing Moravica demolished bridges, carried auxiliary facilities, animals, trees, trailers and concrete pillars. One family was evacuated and the situation is getting worse by the minute. Several villages have been cut off, landslides on dozens of roads, reports the Infoliga portal.

In Sadjavac, the water took away the bridge and the barn where the animals were. Several private residential buildings are also endangered, and fields, arable land, greenhouses are under water…

Deputy Mayor of Ivanjica, Momcilo Mitrovic, says that this is the first time they have encountered such a natural disaster.

The road Ivanjica-Arilje was interrupted for traffic in the town of Klisura, because the bridge connecting these two municipalities collapsed in front of passers-by.

A state of emergency has also been declared in Arilje.﻿

An emergency situation has been declared in the municipality of Lucani. So far, more than 100 residential and commercial buildings have been flooded, and about 40 people are currently being evacuated.

The water in Guca penetrated the plants of Elektrodistribucija and the high school "Dragacevo", while another flood wave is still expected.

In the village of Vica, 31 houses were flooded, the president of the municipality, Milivoje Dolovic, told MNA.

Traffic was suspended on the Lucani-Guca road in Puhovo and Turica, due to the overflow of local torrents.

Due to the high water level, the West Morava came out of its bed in the coastal area and has not caused any damage so far.

Vera Pajic spent the whole night protecting her home with sandbags, to no avail.

"As soon as we fixed and painted the house, Bjelica came and took everything away again. This is worse than last year. Water entered our house and garage, I tried to protect it, but I didn't succeed. The flood destroyed my appliances and furniture. "I live alone and I will not be able to recover from this year's disaster", Vera said through tears, Rina reports.

According to the first information, the river Cemernica overflowed into Cacak, to which the citizens were warned.

"The situation in Cacak is tense and uncertain, the level of Cemernica is not falling, the tributary Dicina is the one that is causing problems because it overflowed in Prislonicko polje. Cemernica is constantly growing," Milan Bojovic, assistant mayor of Cacak, told RINA.

Due to the overflow of the river Studenica, Vladan Todorovic from the village of Mlanca near Kraljevo was flooded with a complete household.

"The river Studenica has never come this far. Due to the narrowing, to which no one reacted, although we warned several times, it overflowed and flooded everything. My cafe, house and shop, along with the goods worth two million dinars, were flooded. I don't know how we will to recover from this kind of damage", Vladan Todorovic stated for RINA.

Households in the village of Slatina were also flooded, and the evacuation began last night.

The river Kolubara, whose water level rose due to heavy rainfall, is under control, said the mayor of Valjevo, Slobodan Gvozdenovic, and added that only Obnica overflowed in certain parts, but that the population is not endangered, local media report.

Due to rising water levels and floods, an emergency situation is in force in Osecina, Krupanj, Loznica, Ljubovija, Mali Zvornik.

In Ljubovija, about 700 houses were flooded, 70 households were evacuated, three bridges were demolished, one of which is on the main road Mali Zvornik-Ljubovija-Bajina Basta.

Obrenovac is complete and neither regular nor extraordinary flood defense will be declared, because there is no need for that, Deputy Mayor of Belgrade, Goran Vesic, said.

Today, in Obrenovac, Vesic visited the embankment in Belo Polje, under the "Milos the Great" highway, in order to make sure that all measures have been taken to protect against possible floods. Trstenica, Tamnava and Kolubara have been completely cleaned, Vesic said, adding that together with the EU, about 67 kilometers of canal network, riverbeds have been cleaned... "We have reconstructed all pumping stations at seven places where embankments were breached in 2014, those embankments have been completely reconstructed", Vesic reiterated.

He said that the Sava and the Danube are a meter and a half away from the regular flood defense and that there is no problem on the territory of Obrenovac. As he pointed out, even where water always flows, in the settlements of Poljana and Konatica, there was no outpouring.