Serbia, as entire Europe, is coming out of the coronavirus epidemic, now only sporadic wads of infection will appear, pulmonologist Branimir Nestorovic said 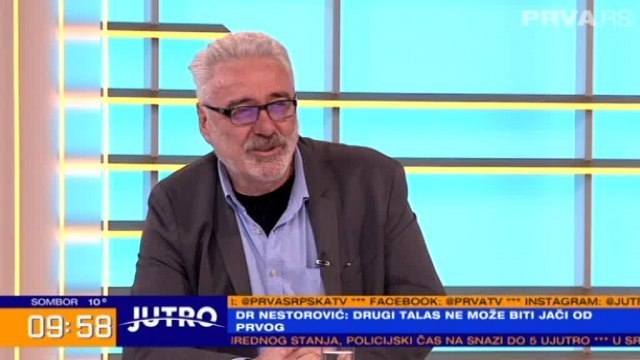 He adds that it will probably be like that by the beginning of July.

The virus, he says, is now weak and out of 66 newly infected, only one or two have pneumonia, while at the height of the epidemic, 20 or 30 had pneumonia per 100 infected. Asked whether gatherings would be banned, Nestorovic said he didn't think so, because there was no reason for that.

"A lot of people are being tested, and a small number of those are infected. Even those who are positive do not get sick, they do not have a pronounced clinical picture," Nestorovic said.

In this period, the elderly and chronically ill are still at risk, while the young are not at high risk.

"We cannot close the country and destroy the economy because of a dozen patients who have pneumonia. We have tests, we are treating them. There is no point in further limiting people. Now that would be impossible because people have mentally gone through an epidemic," he said.

He assesses that the statements coming from the World Health Organization are rather scandalous and cited two examples: the first related to chloroquine and the withdrawal of the study, and the second that asymptomatic patients are not infectious to other people.