Prime Minister Ana Brnabic convened a session of the Crisis Staff for Tuesday, to discuss current situation with the coronavirus, especially the new hotspots 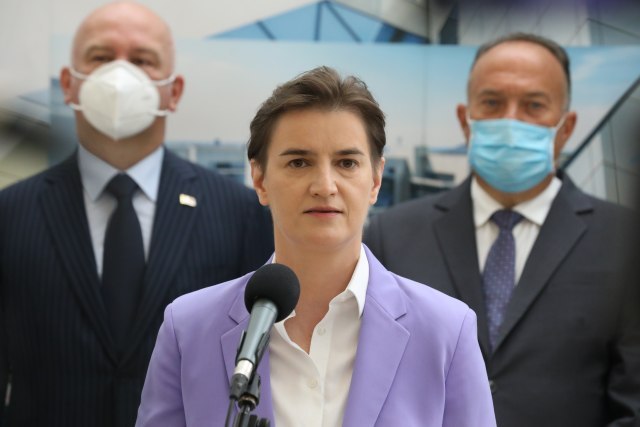 She stated that the Crisis Staff will consider the issue of possible opening of administrative crossings between central Serbia and Kosovo and Metohija tomorrow.

"I will insist that it be resolved as soon as possible, that is in our greatest interest." We will see if we solve it tomorrow", Brnabic told reporters.

Asked about relations between Belgrade and Pristina during the coronavirus crisis, Brnabic said that throughout the crisis, Serbia tried to have good regional cooperation and support all regional partners, regardless of differences and confrontations, emphasizing that the most important thing in the previous two months was to preserve lives and health of people.

He says that Serbia helped everyone in the region in difficult circumstances through continuous export of oxygen, donation of tests, export of flour and other food products.

Prime Minister said that during the crisis, there was certain communication with Pristina, and that the government tried to make those relations better than usual, in the interest of people's lives and health.

"I would not say how Pristina reacted to that, it is not important, but how we reacted is what matters. When we donated 1.000 tests to Pristina, we did not want to collect political points. That was once again an outstretched hand towards the region", Brnabic said.

When it comes to Vranje as a new hotspot, the Prime Minister said that it is a local hotspot, and that at this moment the situation at the level of the whole of Serbia is under control and that she believes that the situation in Vranje will be resolved.

"I have scheduled a meeting of the Crisis Staff for tomorrow, to discuss whether anything needs to be done. We are not planning any new measures now, but I appeal once again to everyone - the crisis is not over. We have come out of the worst times and we can live more or less normally, but we still have to wear masks, to keep our distance", Prime Minister pointed out, when asked if and what measures could be introduced after the sudden leap in the number of infected people.

Brnabic said that the situation is being monitored in detail and continuously, that is why it was decided to continue extended testing, between 5.000 and 6.000 people a day, just to know if any local hotspots appear and how to react immediately, in order to detect all asymptomatic cases, with the main aim being - eradication of COVID-19 throughout Serbia.

"We had a crisis situation in Nis, a local hotspot in Leskovac, now we have it in Vranje. You will see information, but even today the number of infected people in Vranje is increasing, yet, it is still under control", Brnabic stated.

Prime Minister pointed out that she always talks about numbers at the level of the whole of Serbia, because then it can be seen whether the situation is under control, and that it seems that at this moment it is under control and that we will manage to fight.

Brnabic once again appealed to everyone not to forget that we have not yet declared an overall victory, but that the epidemic is still there, and that we can live and work with all prevention measures.

"We will monitor the results, the scope of testing has been expanded. Health is absolutely a priority", Brnabic concluded.