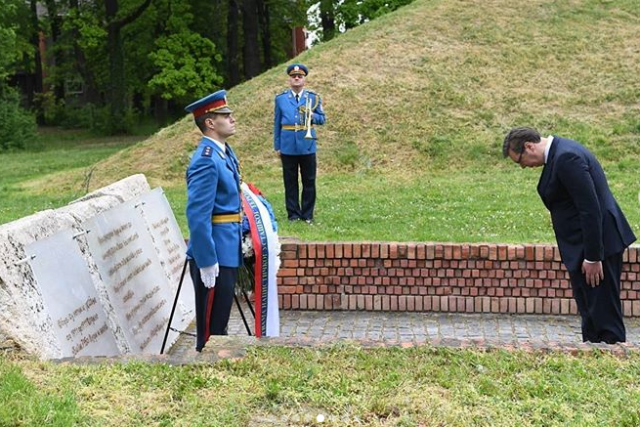 Sremska Mitrovica is one of the largest execution sites in World War II, the place where thousands of Serbs were killed, including the great painter Sava Sumanovic.

On the monument in Sremska Mitrovica, on three stone slabs, among other things, it is noted that 7.950 men and women have been killed by Germans and Ustashas since 1941 to 1944.

"We must not and will never forget Donja Gradina, Jasenovac, Sremska Mitrovica, no camp, mallet, knife or bullet, no tomb or crime against the Serbian people", Serbian President Aleksandar Vucic said today.

"We will not forget any of the names of those who pursued the policy of extermination of one nation, the Serbian people", Vucic said in his address at the Sremska Mitrovica Memorial Park on the occasion of Remembrance Day for the victims of the Ustasha Jasenovac concentration camp in World War II.

“We have no right to forget, because in this way we would give up and turn our heads away from justice, freedom, our own existence, and even God,” Vucic said.

He said that he came to Sremska Mitrovica today, because since the opening of the Memorial Park, no Serbian President has come here, Tanjug reports. “In our schools textbooks, little is known about this place. Not enough is being learned about Jasenovac. How, then, do we think that those who are members of the people who committed the atrocities would have a different attitude to what happened in the past", Vucic said.

He recalled that for several years Serbia and Republic of Srpska have been jointly commemorating the suffering of the Serbian people.

“We show unity for the first time in decades, even centuries, we show it every year, remembering the great sacrifices and sufferings of the people, and showing the direction that our people can only go towards a different future,” Vucic concluded.

"Killings ordered by the state are not just murders, it is slaughter and genocide. Genocide was committed against Serbs in the Independent State of Croatia (NDH)", he said.

"If we had just spoken about the genocide committed against our people in time, perhaps the wars of the 1990s would not have happened", Serbian President pointed out.

"We should make sure that no Jasenovac or Storm should happen again," Vucic concluded.