"The night in Nis was awful, we have a new hotspot" 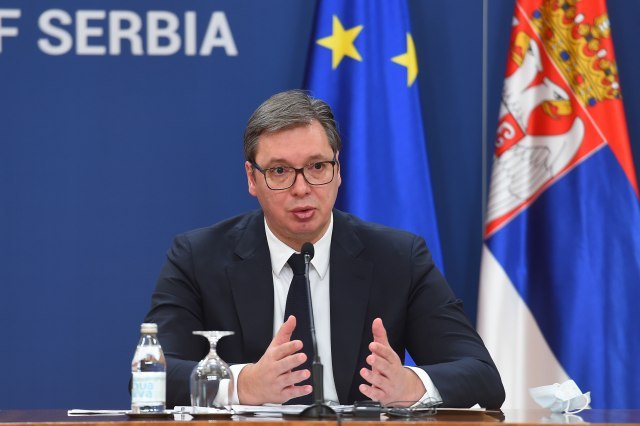 As Vucic told TV Pink, the previous night was the worst in terms of deaths.

"For us, the previous night was terrible, one of the worst so far, primarily because of what happened in Nis. People who underestimate this disease ... A disease like this was created to attack our parents", Vucic said.

He reiterated that the disease threatens to attack our parents, though it also attacks the young, pointing out that it destroys the organisms of older people, "Novosti" reported.

"The virus entered the Gerontology Center in Nis and wreaked havoc. There are more and more of the deceased from that gerontology center," Vucic said.
As he said, what happened in Nis is a disaster.

"Fortunately, the disaster happened in only one place. It had entered just a couple of another one or two institutions. There are thousands deceased in the United States, England, France."

"We need to show an awful lot of caution because it is not over", said Vucic.

"The numbers are dropping. We have a new hotspot, it's Negotin."

"More people have entered Serbia since the onset of the crisis with COVID-19 than in Romania, and Romania has a huge diaspora. You can map that at the places where the diaspora came, that's where we have the biggest problems," Vucic said. He reiterated that it is needless to say how bad it would be for us if we haven't imposed strict measures, it is enough to look at how it is elsewhere.

"Some celebrities accuse us of reporting that people died from coronavirus, even though that was not the cause of death. We are not hiding either the dead or the infected. We will not test a small number of people while our people are dying. Compare the number of dead in March last year and this year, you will see that there are fewer of them this March, it is because people stayed at home, looked after themselves, lived healthier lives", Vucic said.

He emphasized that elections in Serbia will be decided in accordance with domestic legal acts.

"There is an idea in a part of our public that we need to please the foreigners. I have been chosen by the citizens of Serbia and it is my job to represent their interests. I was surprised by the childish desire of some media to criticize me. These people probably think it is our job to be condescending towards the foreigners, and it is my job to represent our brave nation with dignity. I represent a proud people. I will not condescend to anyone, as I never did. We will send significant help to the Italian people today and that is extremely important. We were able to provide for ourselves everything we needed", Vucic said.

The elections in Serbia will be determined by the Constitution and laws, not the EU, he said.

"We will discuss the election with those who want to participate in the election. On what date it will be scheduled, we will see when we tackle the epidemic. They want to take advantage of people's dissatisfaction with sitting at home, believing that they will receive much more support than they had. It's not particularly moral, but it's legitimate, and I believe they have a great chance. We put the lives of people above everything else. Tell me the name of the person who will call me and say, "The elections should be on that date." Who can dare and tell the President of Serbia that the elections should be held on the date set up by an outsider. I do not know such a person. The Serbian leadership was elected by Serbian citizens, and according to the constitution and the law, it is clearly determined when the elections will be held. I believe that in the weeks ahead, we will sit down and agree on the date. The party I lead will suffer most most damage", Vucic noted.

"I lost many people close to me"

Vucic urged citizens not to annul everything we have done so far, and what we were doing for a month in the finish line, only to be beaten by the disease because it was more persistent.

"I lost many close people ... Bane Blazic was the founder of the party I run, I lost my best friend from childhood, my first neighbor who was both younger and stronger than me," Vucic said and concluded:

"This is a vicious disease and it cheats you up for the night. You come in with a mild fever and in an hour or two, it turns out you can barely breathe. We need to endure, to stay isolated. We profited largely from the last weekend, all these fewer people coming for testing... It's because people were isolated for Easter holiday. Let's try to fight back and then there is no doubt that we will be able to say that we have won this battle".