7 new deaths from COVID-19: "Lifting emergency does not mean the end of outbreak"

According to the latest information, seven more people have died in Serbia by 3 pm, bringing the total number of dead to 110. 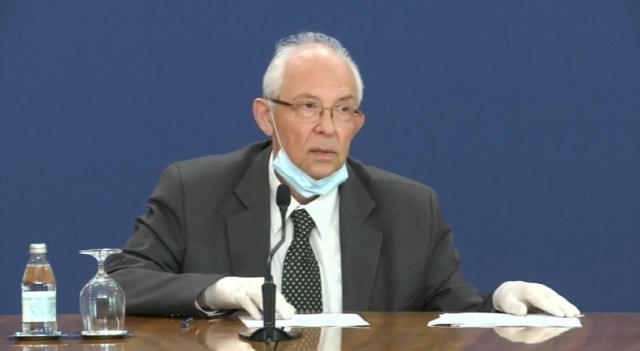 They said that 3.094 people had been tested over the previous 24 hours bringing the total number of people tested to 32.566, while 372 people have been tested positive for the last 24 hours.

There are also 616 health workers out of 6.567 tested for coronavirus. We are awaiting the result for 954 more, the conference said.

"I think we do pretty well. As a health care provider, I feel safest when I have all the equipment I need. I'm not saying that healthcare workers have not contracted COVID-19 in the workplace, some of them certainly are," said Ivana Milosevic, Deputy Director of the Clinic for Infectious and Tropical Diseases.

As regards the work responsibilities of blind and partially sighted persons, the profession had no answer.

"It's not a question for us. They are special needs people and it's a question of whether they can work at all. It can be discussed and a solution can be reached," Kon said.

Experts have denied allegations that the order to use the visors was only sent on April 15.

"This is the first time I've heard of that order. Employees have the right to use either glasses or a visor," Milosevic said and Kon agreed.

They added that the Institute for Orthopedics Banjica has already started receiving patients and that it still has vacant capacities to receive new ones, in response to a question about what will happen when the capacities at COVID hospitals in Belgrade are filled.

The Austrian authorities said they expected the situation to normalize in December or January, and Kon also gave his opinion on the situation in Serbia.

"We have a state of emergency and a declaration of an epidemic is of particular importance. Lifting a state of emergency is one thing, and it certainly does not mean canceling an epidemic. It will be declared when there are no more conditions for COVID-19. It will happen when it happens", Kon said, adding that they have a plan to conduct a population immunity test by summer.

"By then, new data on the virus will be coming from all over, and much more will be known about its potential and what can be expected. We think it is too early to start testing immediately, we need to wait for the end of the epidemic to have a realistic picture of immunity," he said. He announced that the measures would be eased at some point.

"The measures will last, not as they are now, but they will be seriously considered in relation to what will necessarily be applied or recommended. It will slowly relent as time goes on," Kon said.

Milosevic said those now overwhelmed by the virus should be protected in the fall. She later added that the infected mother and baby from Kosovska Mitrovica had a mild clinical picture and did not expect any consequences for them.

The deputy director of the Infectious and Tropical Diseases Clinic stated that, for the time being, she did not notice the attenuation of the virus in new patients.
"I don't see the difference yet. It's still fresh. When you work where I work, patients come to us and it makes no difference. Maybe someone working at a triage center might respond, but patients with a more difficult clinical picture do not come here. Over time, we expect fewer clinical cases", Milosevic concluded.