443 recovered; "Almost 200 people will be disharged from hospital in the coming days"

According to the latest data from the Ministry of Health, 445 new coronavirus infections have been confirmed in Serbia, while 3.194 people have been tested 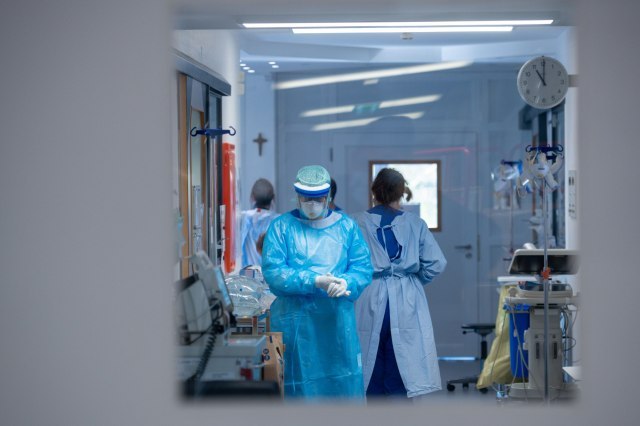 At 3 pm, four people have died in 24 hours in Serbia, totaling 103. Three men and one woman died.

There are 3.511 patients hospitalized in Serbia, with 128 people on the respirator.

In the last 24 hours, 3.194 people were tested, and 445 were positive on coronavirus infection.

Since the first case in Serbia appeared on March 6, the number of tested people was 29.472 and 5.318 proved positive with the coronavirus, while 3.511 persons were hospitalised.

The number of patients that recovered is 443. Today, 21 more people from the Clinical Center Nis received a double negative test and they were discharged home.
"Of the 66 tested in Nis during the course of this infection, all are negative," Dr Kisic Tepavcevic added.

"Capacities in southern Serbia are ready to accommodate all of our citizens who were suspected and were diagnosed with COVID-19. The clinical center will receive moderate and severe cases, with those with lighter symptoms being placed in temporary hospitals. I don't understand why anyone claims that we haven't provided accommodation for the patients, or that some of them were not admitted to hospitals, we had no such complaints", Dr Branislav Tiodorovic said.

He said the situation in Blace are under control.

"There has been no protest in Blace. This is a difficult situation in Trbunje, with special needs patient. We have 27 confirmed workers tested. The situation is there at a 24-hour follow-up. We will repeat the control tests. It happens, we should not be surprised. Everywhere there is doubt about the procedures, whether we have done everything well and the like, it can all be checked", Tiodorovic said.

Pensioners need to be aware of the situation, he noted, explaining the decision to allow this category of citizens to go 300 meters away from home. He urged that the measures be followed as before.

"This is normal especially before this big holiday. The impression, based on the information we get, is that a huge number of citizens are behaving responsibly and in accordance with the measures. I will add to this, we need steel discipline. We need to use protective equipment while we go outside, visiting stores. I, like my generation, go to get supplies when it is designated for seniors. I respect that and I have to be an example", Tiodorovic said.

"In 15 institutions, the homes for old or gerontological center, the presence of virus has been confirmed. 271 users and 53 employees have been confirmed to be infected with coronavirus. We have repeatedly stated that this is the most vulnerable group, maximum controls are being implemented, where the highest number of positives were registered, 151 confirmed users and employees and later in the day, another 14. They have mild symptoms, but were transported to KC Nis out of precaution", Dr Kisic Tepavcevic said.

Seven newborns have been infected so far, but Dr Kisic Tepavcevic notes that they have no symptoms or the symptoms are mild. Three newborns were discharged from hospitals.

"The possibility of possible closure of cities identified as potential hotspots must be emphasized by the fact that the majority of our citizens behave responsibly and conscientiously and we have a small number of citizens moving from one city to another. The new hotspots were created by imported cases. Hotspot is in the west of Nis where intensive epidemiological research is being conducted to stabilize the epidemiological situation there, too. Looking at the behavior of our people and their responsibility in this regard, we considered it unnecessary to adopt such an additional measure", Dr Kisic Tepavcevic said.

Tiodorovic said he was looking at data from Nis, and that 30.24 percent of those younger were infected, from 40 to 55 years old. "They are young to me," Tiodorovic added.

When asked by a journalist about the patients' complaint that there were no test labs at the Fair and therefore they were lying longer at the Fair, Dr Kisic Tepavcevic said:

"We consider when the most appropriate period is for swabs, to avoid false negative results. We use the gold standard method. It all takes a certain amount of time, but we have taken this approach, which is most valid because our citizens are our first priority."

Tiodorovic added that today we have a situation that gives us hope for a much better, optimistic forecast.

"We expect that in the next two to three days almost 200 people will be released from the Clinical Center and temporary hospitals. This has not happened so far", Tiodorovic concluded.

This time, the conference was held in Nis.