According to the updated information, 424 people tested positive for the coronavirus in Serbia, bringing a total number of infected to 4.054 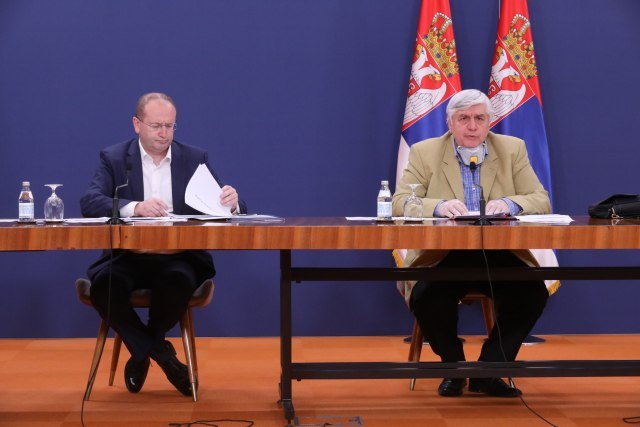 2.890 have been hospitalized, while 138 patients are on the respirator, provincial secretary of health prof. Zoran Gojkovic said.

There are currently 387 patients at the Belgrade Fair.

The situation in nursing homes is getting complicated, director replaced in Nis

Gojkovic especially criticized the Gerontology Center in Nis, in which 140 people and four employees were infected, and noted that there were indications that the symptoms were hidden in the early stages.

He confirmed that the director of the Gerontology Center had been arrested and he could be sentenced to 12 years imprisonment.

"The message to all of us after this may be that the state is doing its job. That all those who do not respect the measures of the Government of Serbia will be severely sanctioned and punished", Gojkovic said.

The three most important factors in the "Serbian scenario" are the measures that were put in place and they came into force on time, Gojkovic said.

"The second link is the protective equipment that all our employees in direct contact with the sick are provided with, and the third most important link is our health care workers, doctors, nurses, all who fight for the lives of our citizens in our hospitals," Gojkovic said.

He said the weakest link in the procedure was disrespect for the measures and once again asked citizens to respect the measures, take care of social distance and be obliged to report if they had symptoms.

Gojkovic added that citizens will be informed in a timely manner about new measures, as they have done so far.

"The profession has so far shown the highest level of concern for our oldest fellow citizens. They are the most on our minds", he concluded.

Gojkovic said that currently 15 percent of health workers in Serbia are infected, which fits in with world statistics related to all other countries that haven't gone through a severe epidemiological situation such as was the case with Italy, Spain and the US.

He said he understands the clergy and Orthodox worshipers who would like to mark the Easter in the traditional way.

"From the very beginning, the state has taken a clear and precise course that it will listen exclusively to the profession in a crisis situation. At this point, the medical profession and healthcare professionals and everyone involved in the Crisis Staff and who are on the front lines of defense are simply urging to reduce as many contacts as possible and to socially distance ourselves as much as possible", Gojkovic said.

"Serbia may be better off on respirators than some richer countries"

In Serbia, there are currently 138 patients on a respirator, which is a slight downward trend compared to previous days, epidemiologist Branislav Tiodrovic said today.

"If we compare it with the data of the previous days, it is a slight downward trend, which may give initial optimism, because those who are on respirators are most at risk," Tiodorovic said.

"Serbia has enough respirators. We may be better off than some of the richer countries than we are," Tiodorovic said.

Tiodorovic reiterated that the entry of the infection into the Gerontology Center in Nis is a major blow, because of the large number of positive people, whose condition is currently in the phase of a light clinical picture, but since these are elderly people, chronic patients with high comorbidity, this does not mean much.

"All Clinical Center staff will strive to avoid the most dire results. I urge everyone who runs such and similar institutions to understand that we should not be emotional in a situation where you need to enforce the law, when we need to take measures to reduce the chance of infection," he said, adding that those who visited the residents of the facility did nothing good to their family members or friends.

He confirmed that quick tests have arrived in Serbia and will be used in the coming period.

Tiodorovic warned that no protective equipment was used at the Leskovac hospital in the infectious ward.

"It had a terrible cosequence that our colleague, an infectologist, died and seven were positive and fallen ill," Tiodorovic concluded.