Tiodorovic: This is not a question of democracy, this is a matter of civilization 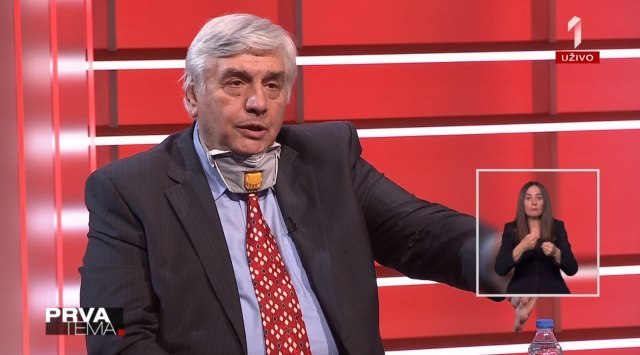 He added that 24-hour isolation would not be required if existing measures were respected.

Tiodorovic, a member of the Health Crisis Staff, pointed out that it is a very important truth that Serbia was the first in Europe to establish such a form of organizing and believes that it was the right move.

"It can be said that this works in a very appropriate way," Tiodorovic told RTS last night.

He believes that 24-hour isolation will not be required if existing measures are respected.

"That is why we have accepted that there will be a curfew on Saturdays, Sundays as implemented, and we will see the effects in five to six days", Tiodorovic said.

It is certain that about 60, 70 percent will get infected, the question is only at what interval, Tiodorovic said.

"Eighty percent of people have no symptoms, or they are very mild. That's the main problem. 20 percent will have a medium to severe clinical picture," he adds.

When those 60, 70 percent pass, Tiodorovic notes, we will achieve collective immunity.

If the plan to combat the spread of the pandemic succeeds, then by the end of April there will be a tendency of a slight fall, and in May, considering it'll be warm weather, the virus will start to suffer from ultraviolet rays because it cannot withstand temperatures above 23 degrees.

"The virus will die, but that does not mean it will completely disappear. Caution remains," Tiodorovic warns.

He noted that there is no controversy with politicians, because experts agree and come to a position that is expertly elaborated and based on arguments.

Politicians, with Prime Minister Ana Brnabic and President Aleksandar Vucic at the helm, take up space in the capacity that belongs to them, the space of the state system, but no decision has been made without previously consulting experts.

He states that experts have suggested that social distance be provided.

"It was necessary to introduce curfew. There is no dilemma here. This is not a question of democracy, this is a matter of civilization. You should be aware of the situation that with social distancing, you protect your health and the health of others", Tiodorovic said.